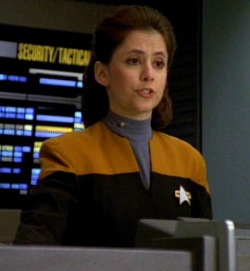 Lieutenant Adraa Mosul was the Chief tactical and security Officer on Starbase 989 in 2413, when Captain Joseph Taylor was murdered.

She was a prime suspect in the murder as she was one of two of the captain's lovers at the time. The other was Doctor Gena Harvey.

Mosul was a slightly corrupt security officer with a bad temper. She was known to threaten to kill people when they crossed her, although she was no murderer. She was however, involved with an establishment on the Starbase named RJs that specialized in petty crimes such as prostitution, minor smuggling and data piracy. They also ran a pick pocket operation from the restaurant. in return for her lack of interference, she received a tidy portion of the take.

In addition to her dealings with RJs, Adraa was also somehow involved with Quol Nor a Ferengi illicit data broker on the starbase, although the extent of her participation is unknown.

Mosul was brought up on a general court martial for her corruption in 2414. She left the Starbase after losing her commission and went to live in the Orion Syndicate.