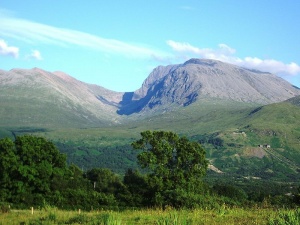 Ben Nevis in the British Isles on Earth

Ben Nevis (Scottish Gaelic: Beinn Nibheis) is the highest mountain in the British Isles. It is located at the western end of the Grampian Mountains in the Lochaber area of the Scottish Highlands, close to the town of Fort William.

As is common for many Scottish mountains, it is known both to locals and visitors as simply the Ben. It attracts an estimated 100,000 ascents a year, around three-quarters of which are made using the well-constructed Pony Track from Glen Nevis on the south side of the mountain. For climbers and mountaineers the main attraction lies in the 700-metre (2,300 ft) high cliffs of the north face; among the highest cliffs in the United Kingdom, they harbour some classic scrambles and rock climbs of all difficulties, and are one of the principal locations in the UK for ice climbing.

The summit, at 1,344 metres (4,409 ft) above sea level, features the ruins of an observatory, which was permanently staffed between 1883 and 1904. The meteorological data collected during this period are still important for understanding Scottish mountain weather. C. T. R. Wilson was inspired to invent the cloud chamber after a period spent working at the observatory.