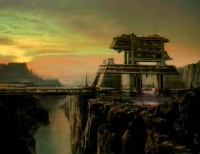 In the late 2350s and 2360s, a research project at the Darwin Station developed Human children who, among other unique qualities, had an aggressive immune system, capable of attacking disease organisms before they entered a Human body. The children's antibodies were also capable of attacking Human beings, a fact not discovered until 2365, when the entire crew of the USS Lantree was killed after exposure to the children.

The scientific staff of the Darwin Station were also afflicted by the antibodies and suffered symptoms resembling hyperaccelerated aging, but a transporter-based technique was successful in restoring all station personnel to normal.

After these events, the children were forced to live in quarantine until such time as the researchers would be able to make them safe to be around. In addition to their advanced immune systems, the children also possessed telepathy, telekinesis, and accelerated growth and maturity. (TNG: "Unnatural Selection")