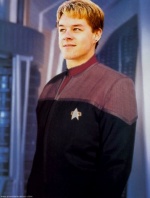 Divon was born on Betazed on 05.24.2384. Divon is the oldest child of Melada and Tiron. Both parents are counsellors although only Tiron served in Starfleet, Melada had a private practice. Divon had a fairly stable and normal upbringing in a typical Betzoid fashion, although the household had a steady flow of 'offworlders' visiting, forcing Divon to become used to other cultures and behaviours. Divon has a younger brother, Rinon, and sister, Betrana.

Divon attended the classical university of Betazed. There he honed his telepathic skills and attended classes in psychology and sociology. Divon graduated in the top 10 percent of his class.

Divon entered Starfleet Academy in 2401. In addition to honing his telepathic and counselling skills, Divon also learned several stations so he would be of use on the bridge besides just advising. His studies also included limited tactical studies, basic Operations and Flight operations. Divon felt that undertaking these various studies would allow him a greater insight into the everyday lives of those that he was working to help.

The USS Trail of Tears was a large converted starfleet vessel used to transport medical, scientific and counselling personnel to disaster sites. It is often a starting point for young counselling/medical personnel. Due to the high stress involved with this duty station, tours aboard the USS Trail of Tears usually only last six months. Divon Lronen started his career on this vessel and lasted for three tours of duty, repeadedly passing up offered transfers. By the time he left, he had become the personal counsellor to Captain John Doorst after the Alpha Four Incident which had left many citizens and children dead or slowly dying.

While high stress, Divon believed he was making a difference during his time on the Trail of Tears. It was only when Starfleet offered Lronen a 'special' assignment on the USS Spectre that he decided to accept transfer.

Divon was assigned to the USS Spectre in late 2406 with the expressed mission of watching Captain Remae Ktell. The Starfleet Admiralty had become concerned with Remae's seeming inability to return a starship without crashing it into things. They wanted a psychiatric evaluation of the Captain as well as constant surveillence. So far, every profile and report Lronen has returned back to Starfleet has supported Captain Remae and stated that he is, indeed, fit for command.

Divon is a fairly high level telepath, however he is extremely mindful of the rules governing telepathic races.