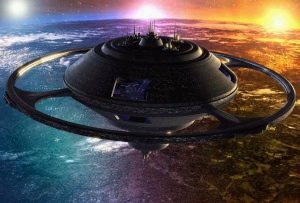 Djorn Major XJ-003 was a maximum security penal facility in use by the United Federation of Planets. Originally intended to house only the most violent of criminals, during the Federation Civil War, Admiral Doenitz converted the facility into a Political Prison.

There, he kept the majority of his political enemies, as well as captured members of the 52nd Fleet while they awaited execution.

In 2407, Commander Dru Tagon a Brikar, was captured by Doenitz forces and tried as a traitor by the Doenitz regime. He was transferred to Djorn Major XJ-003 to await his execution.

Against Orders members of the crew of the USS Nimitz conducted a rescue operation against the facility and rescued Tagon. During the raid the facility was badly damaged, forcing it to be shut down.

The starship USS Vindicator, a Defiant Class vessel was assigned as close support for the facility. It was destroyed by the IKS Hegh’delar during the battle.

After the Federation Civil War, the facility was repaired and reopened, and once again resumed it's operations as a maximum security facility.