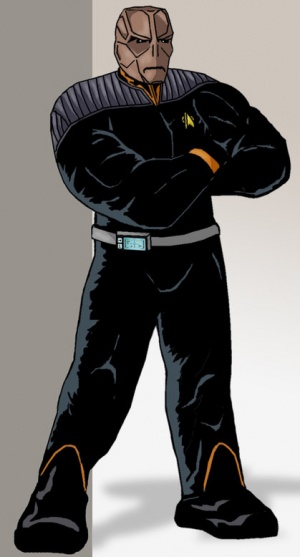 Physical Description: Like most Brikkarians, Dru is like a walking mountain. He looks like a big, walking boulder. His hairless body has a thick exoderm that gives his rock-like appearance. Hitting it is like hitting a stone wall. His brown eyes can give a deep, thoughtful, glare. He only has 2 fingers and an opposable thumb. He is immensely strong and canmove quickly for his size and weight. He is also able to hold his breath for a long period of time.

Background: Dru was born on the Brikkar home world. His father was a high ranking leader in the Brikkarian military. Dru had been groomed to follow in his footsteps, but Dru heard the call to Starfleet and exploration rather than conquest.

Education: Dru was educated in the finest miltary academies on the Brikkar homeworld.

Pre Starfleet: After graduating from Premier Military Academy of Brikkar Dru become an operative in a special operations unit. It was in this unit that he was introduced to Starfleet. His team was asigned to rescue a team of Starfleet personnel who were being held captive on a nearby planet. Dru practically rescued the Starfleet people single handed and decimated the capturing forces. Dru was invited to attend Starfleet Academy, which he did, against his parents wishes.

Starfleet: At the academy Dru majored in History,Tactics and Stratagy, and graduated at the top of his class. He was assigned to Starbase Geneva, where he is now. Dru was believed Killed in Action during the battle to over come the Mars Defense Perimeter in Sector 001 during the last major battle of the Federation Civil War. Tagon valiantly stayed aboard the USS nimitz when that ship was deamaged beyond the ability to continue to fight. he then used the ship as a fire ship rushing the enemy lines and finally detonating it's impulse reactors destroying several enemy vessels. No sign of Tagon was found after the battle's conclusion.

Medical: Dru is a normal, healthy Brikkar- whatever that means.

Hobbies: Dru has a great interest in history and enjoys many aspects of exploration. He enjoys being underwater and can often be found scuba diving.

Skills: Besides his natural strength and durability, Dru has a strong sense of tactics, and has a photographic memory.

Other: Normally, like most Brikkarians, Dru is quite stoic and reserved. He is respectful of authority and very loyal. He is diligent in his duties to the point of being single minded.