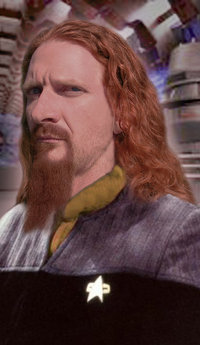 NRPG: 'Worbairns hacky mucky' means 'The baby needed cleaned up. 'Dottle' is the dark tarry crap that forms in a pipe once tobacco is smoked, and it is not nice to drop it, scattering it everywhere making a mess. I hope you guys get a kick out of this. ~Sheila

Mission: In the Hands of an Angry God

Norm leaned back in his chair, his feet on his desk as he stared blankly at the ceiling. He had been quite good at zoning out lately. He had no idea how excrutiatinly dull the life of a department head could be until he had become one. He still got to get his hands dirty, but most of his time was spent "supervising".

He often found himself day dreaming about his plans for the future. He'd planned since he had first obtained his love of tinkering that he would one day open a mechanics garage. It would be a small place, but large enough to accomodate his customers. People still needed their vehicles fixed, and after all he had spent many hours growing up fixing his mother's Whaler. He had broken it most of the time so-

His vacant thoughts were interrupted by the arrival of one of his engineers. He recognized the face of Durston Croft and smiled, romoving his feet from the tabletop.

“Sir, we ha’ been a-wurkin’ and are aboot dun patchin’ that warp nacelle. But worbairns hacky mucky. I wuz aboot to drop me dottle and so they sent me in. Thought ta reporrit in direct sur.” Durstan’s hands shook with exhaustion.

Norm smiled at the thick Scottish accent. He'd grown accostomed to many odd accents over the years, the Itialian one Tony's parents had spoken with, the odd off-Russian accent the Transporter cheif used, the slight German accent of Schliegler and this, the classic Scottish accent.

"Take a load off, Croft. Help yourself to something to eat." He gestured toward the replicator with a lazy wave of his large hand.

He watched the engineer stumble to the machine, and wondered if he should comment on it's awful performance, but figured it was just as well. He would figure it out on his own. “Gissie, tetties and bagies.”

Norm took note of the expression on the Scot's face when he looked at the coffee. He was glad to see someone who agreed with him. "At least you didn't ask for 'muddy' coffee. Made that mistake a few times myself." He chuckled. "Get a lot done?" He decided to add.

“Yessur,” Croft replied. Norm raised an eyebrow as the Scot took in the coffee. Norm remembered it being awful, but he made no comment.

“Afore I went EVA sur, I ha’ already flooshed the plasma manifolds. They couldna’ be any cleaner.” Norm watched understandlingly as Croft worked at his meal. Sometimes it was a task just to chew it up.

"Call me Norm." He said. He still couldn't get used to this 'yessur' business. 'Yeah' worked just as well for him.

"Anything wonderful happen? Anything odd, out of place... anything to get me out of my office!" He said, eying the replicator.

Maybe he could try something to eat, and as always he was in the mood for something particularly odd. "Parmesan Polenta" He said quickly. Hoping the replicator would actually give him what he asked for this time.

More Talking with Croft about Maraht the Horta

Mission: In the Hands of an Angry God

Norm smiled before filling his mouth with water that had been left in a glass in the corner of his desk. He nodded, "I would too. I'm just worried about manuverability if an emergency were to arise." His smile never faltered, even though he was thinking back to the accident that had occured the last time he had borrowed a member of another department.

“We ha’ to maak an emergency harness fur ‘im ta ga oot dooring a crisis. It ha’ strips wi’ attached magnets that would hold him ta the hull. He didna’ need eny air supply niether. He ca’ ga oot ni his skippies, nor enathin’ else fur all that.” Durston’s chuckled . “He’s a right curteous lad, too, weel mannered.”

"I haven't really been able to talk much to 'im, but from what I've seen, I'd have to agree with you - although I have to stay seated when I'm talking to him. There's just a little bit of a height difference." He leaned back and joined in the chuckling.

"You seem to have done your research, Mr. Croft. Couldn't make me more proud of my engineering staff." Had the muscles in his cheeks permitted, his smile would have reached his ears by this point.

(Posted by Justine and Sheila)