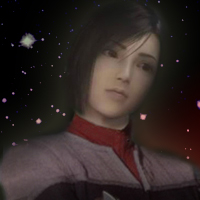 Elenor Night is an ensign (SG). She is believed to have been a CONN officer after graduating from Starfleet Academy. She was a member of the "Wandering Minstrels" Jazz band with Lewis Nymes and James Hudson. After graduation she was assigned to the Defiant-class USS Brilliant as a junior CONN officer.

She has recently been shortlisted for the command courses with a view to becoming a Bridge Officer, and is en route to her latest assignment - the USS Dennison.

Elenor was born to Francis and Ruth Night, a human family who lived on Bajor. From a very early age she was expected to help out on the family's farm, and her free time was limited, causing her to develop a air of independance and a knack for solving problems on her own. When she was in school, she found it difficult to fit in, being one of the only human children in the class, but a friendship with Jayne Matyn helped offset her problems.

She developed an interest in piloting shuttles during her time at the school, and piloted the family's shuttlecraft at every opportunity possible.

Eventually, she took and passed the Starfleet entry exam at a comparitively young age (17) and left to join Starfleet Academy.

At the Academy her piloting skills were immediately recognised, and she was shortlisted for the Cadet Fighter Squadron, and was assigned to the fighter pilot school. In her first year, she graduated from the fighter school, and was returned to the Academy to finish general training, with a focus on becoming a CONN officer.

Whilst on the transport, she witnessed the Breen Incursion and the casualties inflicted on her friends in the fighter squadron, of which only 2 cadets survived.

She was a member of the "Wandering Minstrels" jazz band at the Academy with Lewis Nymes and James Hudson, and was the singer for the group.

Also at the academy, in her 4th year, she and James Hudson spent time developing ideas for starship designs, such as the Topaz Class Shuttlecraft and larger exploratory vessels.

Serving on the USS Brilliant[edit] 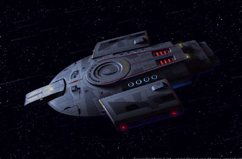 Upon graduation, she was assigned the rank of Ensign (jg) and assigned as Assistant CONN, USS Brilliant; a defiant-class vessel. Since then, nothing is known except that she was shortlisted for the Command course training; and that her training focus is towards the Command side rather than CONN.

Serving on the USS Dennison[edit]

She was promoted to ensign (sg) following her tour of duty on the USS Brilliant, and transferred to the USS Dennison after a two day stop-over at Starbase 375 with the Dennison's First Officer Lieutenant Will Alexander and Strategic Operations Officer Thomas Loyola to fill the position of Assistant CONN.

The Stop-over allowed time for the new crewmembers to get to know one another before joining the USS Dennison.

Mission: Dealing with the Enemy[edit]

After transferring on board the Dennison, she was interviewed by Captain Madison Davis and assigned as ACONN, on the night shift. Her first day was a quiet one, and involved introductions to Xara Lea her boss, and her medical & meeting her long-time friend, and USS Dennison doctor, Lewis Nymes, culminating in her night shift duties on the bridge. During this time, she was made aware of strange computer behaviour by CPO Wallacy (OPS), and went to 2ndry Engineering with Lt. Semme to investigate the cause of the anomalous readings.

She was concerned at the state of the engineering section, and drew her phaser before orders, but her caution was well placed when they found the badly burned and unconcious William Galway, and activated procedures to get him to Sickbay. She then scouted the area, but no one was present. After returning to the bridge, she was asked into the senior staff meeting, and asked to take on more shifts in CONN, as her boss, Lt. Xara Lea was made Acting Chief OPS. She then returned to her station on the bridge, reviewing internal sensor data given to her by CPO Wallacy.

During the night, she uncovered communication logs implicating Dale Bracken in the incidents, and her report to the First Officer Will Alexander was directly responsible for the ensign's arrest, and following that she immersed herself in the Topaz-Shuttlecraft improvements that were unable to be done before the shuttle was launched. Most of the systems were in place, but the Science station and sensor control systems were rudimentary at best, and lower the tactical ability of the vessel to avoid detection. Elenor contacted Lt. Trewe for his help in updating the shuttle.

After the CSO refused her request, she enlisted the recent transferee Charles Bashier as ACEO to help in the improvement programme. She spent the rest of the day overviewing the systems and upgrade work, getting hands on experience with the repair team so when it was operational she would know what was happening, and how to repair it. During this time, she uncovered computer records that proved Dale Bracken's innocence.

This represents the furthest point in this character's history.

Rank
Ensign
Citations
None as yet