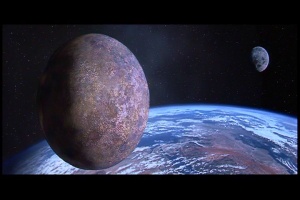 Irlix is a planet in the Beta Quadrant and is home to the Irlixians.

The planet is Class M, about 13,000 kilometers in diameter and is very similar to Earth, possessing a strong magnetic field and orbiting a main sequence star, with a Solar cycle of 32 hours.

The planetary body is comprised of three major and one minor continents, there are signs of moderate tectonic activity in the form of plate movements and volcanic activity.

The planet also possesses two moderate sized ice caps and a hydrosphere (65% water coverage) very similar to that of the Earth (72%). There are four seasons and a variety of climates found on the world. The majority of the climate is temperate, with mountain ranges in located on continental plates similar to the arrangement found on Earth. Rain forests in equatorial regions.

The planet possesses a pair of moons, both Class N.

The planet has been charted but not yet been contacted, by the Federation. It was discovered by the crew of the 52nd Fleet exploration vessel the USS Champlain in 2306.

At present the inhabitants of the planet seem to be in a neo-tribal computer-age industrialized society. There are strong indications that there are strong social and ideological divides among the population. The planet's general technological development is roughly equivilent to that of the Earth, circa 2100. However, there is also a strong reason to believe that the Irlixians may have been exposed to Federation technology. Initial scans have discovered an early Warp Drive signature that is very similar to those used by the United Federation of Planets. Before it could be investigated however, an encounter with an enemy warship forced the Champlain to withdraw from the system.

Officially, no contact has been made with Irlix by the Federation.

Irlix first appeared in the USS Champlain Mission The Hesphateus Principle, and again later in the USS Rosenante mission : The Gilded Man