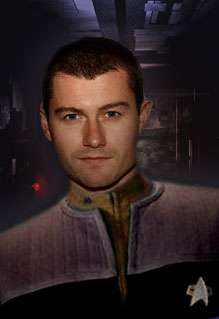 James Hudson is a Engineering Officer with the rank of ensign. He was a member of the "Wandering Minstrels", a campus Jazz band with Lewis Nymes and Elenor Night. After graduating from the academy, he was given his two weeks of leave, and used it to visit his family at the Lunar Colony.

He was initially assigned to the Future Vessel Research Team at the 52nd's shipyards, and then was transferred to the resupply fleet for the 52nd, eventually being assigned to the USS Champlain.

James' family lives in the Lunar Colony; his father is involved with Starfleet in ship design, and his mother is a nurse at the medical station in the colony. Growing up, he was influenced by Starfleet; his father would oftentimes be whisked off on board a new prototype ship and the young Hudson would accompany him - it is from this early exposure to new ships and working things out that he found his love for making things work.

He was sent to boarding school on Earth to continue his education, and was sponsored into the Academy by Lieutenant Aberole, his father's colleague.

James entered the academy as a forthright, charismatic young man, and used his skill in music to befriend "Nymes and Night" at "The Jazz Inn", a off campus bar which was frequented by the academy students. Thus started the "Wandering Minstrels", and his friendship with the two young officers. Whilst at the academy James Hudson ("Jaitch") was a member of the Academy's Fencing team, along with Lewis Nymes, and along with the trill, was part of the successful team.

During his years, his passion for ship design increased, and his plans for a new shuttle - the Topaz-type, an improvement on the Type IX shuttle - were viewed by his sponsor and taken up for consideration. A prototype shuttle was built, and assigned to Lewis Nymes when he was assigned to the USS Dennison. It is now part of that ship's shuttle complement.

After graduation, he was given his leave, and visited his parents on the Lunar Colony before going to his first assignment as a ship designer at the 52nd's spacedocks.

Hudson settled into his new assignment as part of the "Future Vessel Research Team" rapidly, his background in engineering suiting him in this role, and he was eventually promoted to Senior Grade Ensign.

After his first tour of duty, James Hudson was assigned to the USS Champlain as an Engineering officer. As a team leader in the engineering department it was his duty to report in to the bridge from main engineering with status reports during any crises.

This represents the furthest point in this character's history.

Awarded Captains Commendation: For taking part in the liberation of DS5 and the defense of the Champlain from the USS Wyvern. Stardate 2407.03.04