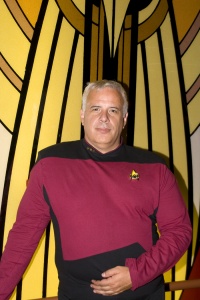 Captain Joseph Taylor was the commanding officer of Starbase 989, located on the border between the Romulan Star Empire and the United Federation of Planets.

Taylor was a corrupt official, often exacting serious bribes and favors from merchants wishing to ply their trade between the RSE and the UFP. He would often extort merchants and businessmen on the station. This extortion was commonly called Taylor's Fee.

In 2413, Captain Taylor was murdered during a Martial Arts Tournament aboard the station. He was found in his quarters and almost immediately a series of complex suspects emerged.

As the USS Rosenante was docked on the station, Captain Ahmed Ibn Salid assumed temporary command in order to both solve the murder and to make some sense out of the chaos that the station was in. It seemed that there was no one on board that didn't want Taylor dead for something making it very difficult to solve the man's murder. Because of the wide range of suspects, including several junior officers, Salid ordered the investigation to be undertaken by his own crew.

Captain Joseph Taylor was first seen in the USS Rosenante Mission: Touch of the Eidolon