Khran is a Starfleet Marines Officer, currently serving onboard the USS Spectre. 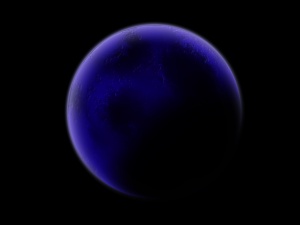 Khran was born on Andoria. He was born into a father and mother who were both members of the Andorian Self Defense Force. When he was 15, in 2388, he had a nasty case of the Rigellian Fever.

He orginally wanted to join the ASDF, but in 2391, a secondary school teacher of his influenced him to go above and beyond his dreams and aim for Starfleet. Khran didn't think he was good enough to enter, but agreed to try. Later that year, violent riots broke out in certain neighborhoods in Andoria's captial city. Khran's mother was killed by a crude explosive device and Khran's father was paralysed from the wasit down and unable to speak to communicate. This event changed Khran, he became cold, closed and quiet. He applied to the Academy and be a Tactical Major.

Khran got a below-average grade on the entrance exam, but was still passing. He was accepted and was excited about moving to Earth. He enjoyed his classes, but found the Tactical one difficult, however was a natural at the phaser marksman ship, hand-to-hand combat and other Security-based traits. Khran was worried that he would never get accepted has a TAC/SEC because of his lesser ability in Tactical.

One day after a evening workout, Khran was ambushed by eight upper classmen, all humans. Khran was able to fight them off, but was seriously injuried. He grew to dislike human-esque spices (Humans, Betazoids, Vulcans, Bajorans). He returned to his quarters to find a subspace message from Andoria, his father, after years of being paralysed, slipped into a coma, and shortly there after passed away.

Khran was devastated, but focused his energy into his studies. Depsite his anger at humans, he was still kind to all professors, including human ones. During his third year, he began seeing a young Bolian female named Chenoll, who was an Engineering major. Despite Chenoll's wacky, outgoing and loud personality, and Khran's quiet, reserved, and cold personality, the two got a long and began a romantic relationship.

One night, after a nice date, Khran and Chenoll had an argument over Khran's opinions on humans. It evolved into Chenoll running away and never speaking to Khran again. Khran, with no known living relatives, and no other friends, closed himself off more and more and focused on his studies.

Khran graduated from the Academy with good marks in his final exam, with a few points off in his tactical strategy. He vowed to study up in holographic simulations and become better in his tactical section. 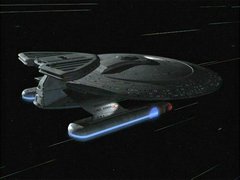 Khran's first assignment was the USS Wilson, captained by Captain Robert Rogers III (see Brian Rogers, his youngest son). Khran was given the rank of Ensign (JG) and the position of Security Officer, basically a glorified security guard.

Khran had a normal tour of duty, not impressing anybody, duting his duty and showing up every day. He spend his free time in the holodecks, working on his tactical strategy.

Following the retirement of Captain Rogers, the USS Wilson was decomissioned with her CO, and Ensign (JG) Khran was transfered to the USS Rettinger.

Khran's tour of duty on board the Rettinger was started off uneventful. However, excitment came when he asked the Tac/Sec of the Rettinger if he could demonstrate his new tactical abilities (learned from simulations) and possibly be promoted to ATac/ASec. The Tac/Sec brushed him off and ignored him.

Khran's fellow crewmates in the Security Department encouraged him to go to the Rettinger's first officer, mayber to her captain and ask again, but Khran choose not to. He respected the chain of command and chose not to go over the Tac/Sec's head. Khran was promoted to Ensign (SG) during his time on the Rettinger.

Khran got his moment to shine later when the USS Rettinger was attacked by a band of criminals who had the goal of kidnapping the Federation Ambassador to Angel One. The USS Rettinger was disabled and the ship was boarded. Khran lead a group of junior officers and retook several important crew areas, including Main Engineering and Ten Forward (important because of the large amount of captured crewmembers there). However, Khran wasn't promoted or awarded a medal for his actions. Khran however, didn't complain and kept his respect, and refused to tell the FO about his complishments during the hostile takeover.

Finally, when Khran's friends in the Security Divison went to the first officer with good reports of Khran's actions, the Tac/Sec put in a request directly to the CO for his transfer, and it was granted. Khran was transferred off the Rettinger.

The USS Pillar of Autumn

Khran was only on the USS Pillar of Autumn a short time. He had been doing his same old position has a security guard. During this time, he quick his tactical simulations, has he had given up hope on ever becoming a ATAC/ASC. 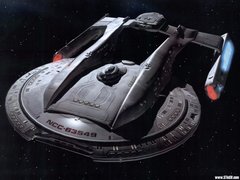 Khran contiuned to impress his superiors. His CO nominated him for a list of poteintal chief tactical officers. When the call for the USS Dennison came, Khran was picked. He was promoted to lieutenant and sent on his way.

On his way to the USS Dennison, Khran had planned on studying the files of the crew of the Dennison, however he found that all but three files were missing. He contacted Captain Robert Rogers III, and tried to pull in a favor, but Captain Rogers was not able to find any information, despite his contacts with Starfleet Command.

Khran is currently TAC/SEC on the USS Monhart. He served there during the end of the Federation Civil War.

Khran was 'drafted' so to speak into the Starfleet Marines, as he was selected and transfered to the Marines. Khran had a number of months of 'retraining' while he learned ground combat skills, conditioning and the Marine way of life. Following that, he was transfered to the USS Spectre.

Khran was sent to his first Marine assignment, attached to the company onboard the USS Spectre. Onboard the Spectre, Khran met Brian Rogers, the youngest son of his first captain, and Chenoll, his lover from Starfleet Academy.

This represents the farthest point in Khran's career thus far. This will be updated as events unfold.

Khran is played by Kevin Schram.