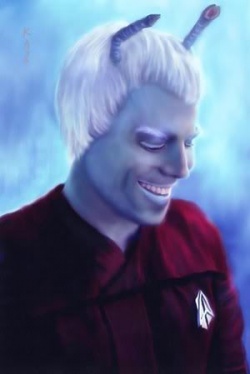 Lieutenant Kraal is an Andorian Starfleet officer assigned to the position of First officer of Starbase 989.

He has a strong dislike for Ferengi, which was a boost to his time in service under Captain Joseph Taylor

in 2413, Kraal was advised that the body of Captain Taylor was found locked in his quarters. Following regulations, he contacted Captain Ahmed Ibn Salid, commanding officer of the USS Rosenante, which was docked at the starbase at the time.

He then turned over the jurisdiction of the investigation over to the the visiting Starfleet captain. While Salid and the other members of the Rosenante crew were investigating the murder, Kraal continued to focus on the day-to-day operations of the starbase, showing little initiative or desire to perform well in a role as Base Commanding officer, despite his training.