Leesa Nicole Stanton was born to Victor Stanton and Demora Stanton on November 15th 2380 on Terra.

Heir to the Stanton Family fortune she was expected to be a good girl, attend the schools her parents picked for her and marry the man they chose as well.

Against her fathers wishes she joined Starfleet and despite her fathers attempts to use family influence and wealth to have her kicked out she was able to follow her dream of a career in Starfleet.

The Best Education Money Can Buy:[edit]

Stanton attended Harvard earning a double B.A. in literature and Pre-Warp Terran History. She minored in Stage and Creative Writing while maintaining a GPA of 3.78.

While in the Academy Stanton Majored in Starship Operations, Navigation and Intelligence Gathering as well as taking advanced classes in Starfleet history. While not at the top of her class she did graduate in the top ten percent. It was during this time that she discovered her one true love.

Leesa is a pilot in every sense of the word. From Shuttles to Runabouts, Fighters to Starships, and the bigger the better in her mind. With a tendency for performing what others would think of as suicidal maneuvers Leesa has a “feel” for what a craft can do and is able to perform maneuvers that other officers would not even attempt.

In her final test while conning a Nebula Class: training vessel she passed within one meter of the space docks still opening doors, earning her the ire and a deduction in points by her tester. When the instructor refused to believe that she had performed the maneuver on purpose she repeated it on the way back in to prove him wrong. She passed her final with a perfect score…and with a letter of reprimand.

Due to her fathers attempts to have her cashiered and due to his support of the government lead by Admiral Rodrigo Doenitz, Stanton requested to be posted to the 52nd Fleet upon graduation in order to escape her family’s influence and to get back at her father by joining those who opposed his political ally.

Leesa is a fair shot with hand weapons and has a good grasp of propulsion engineering although she hates to get her hands dirty. She holds a black belt in judo and practices regularly. 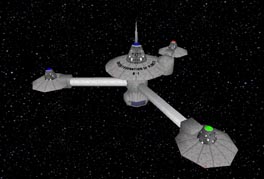 Stanton was assigned to Communications Relay Station SFB-13 upon graduation from the Academy. The assignment came as a result of her illicit relationship with the married son of Admiral Natalie A. Cole, which resulted in the breakup of his marriage. While the assignment had been intended as a career breaker for her, luck was with her and she was transferred after six months, to take over at the Helm of the newly commissioned USS Champlain. 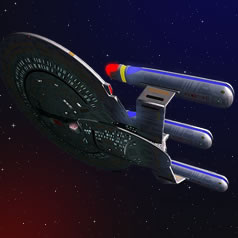 On Stardate 2407.03.04 she was awarded a Captains Commendation for taking part in the liberation of Deep Space 5 and the defense of the USS Champlain from the USS Wyvern.

Mission One: Worlds Once Lost[edit]

On Stardate 2407.03.07 as a member of an away team Stanton was sent to Ivor Prime to help discover the fate of that colony which had been attacked by the Borg thirty years previously. She inadvertently helped discover the underground research complex on Ivor Prime by falling into a hidden airshaft that had been buried under the rubble of the city.

Despite her injuries she continued to assist by helping to prevent the complexes main reactor from overloading and helping to explore the complex before being overcome by her injuries and being sent back to the Champlain for medical attention.

Stanton's tour aboard the Champlain was cut short by an emergency message from her father Victor Stanton, that her mother had become terminally ill. She was released from her duties on the Champlain and sent home on Compassionate Leave as of Stardate: 2407.03.09. As such she left at the very beginning of this mission.

While Stanton's time on board the Champlain was extremely short, it turned out to be a very rough start to her shipboard career. She soon found herself embroiled in an extremely adversarial relationship with the Champlain’s Chief Operations officer, which left her in a precarious position. Her unexpected transfer removed her from the potentially volatile situation but left her shaken; with her confidence gone and wondering if there was a place for her in Starfleet.

Stanton discovered upon her return to starbase Geneva that the entire story of her mother’s illness had been a ruse by her father in order to get her back to Terra and under his control.

Luckily for Leesa her mother, Demora Stanton had learned of the plan just after her husband had implemented it and also learned that Doenitz’s security forces would be on hand to ‘debrief’ Leesa upon her return. Leesa would then be forced to either resign her commission or to take a posting with forces loyal to her fathers political ally, Rodrigo Doenitz.

Upon learning of the plan Demora was able to transfer a large amount of credits from her husbands accounts into her own personal accounts, whereupon she made her way to Beta Quadrant and Starbase Geneva where she was able to intercept her daughter and warn her of the ploy.

Leesa was overjoyed to see her mother alive and well and she resolved to remain in Starfleet and make one more attempt at pursuing a career.

Stanton was assigned to the USS Nimitz NCC 75878-E on Stardate 2407.03.21 as an Assistant Operations Officer and a Conn Officer.

On Stardate 2407.03.29 she was awarded a Combat Action Ribbon for services rendered in freeing Cait Prime for the Occupation of Doenitz forces and it's illegal and immoral experiments.

On stardate 2407.12.30 she was awarded both the Combat Action Ribbon and a Captain's Commendation for her part in the final battle against Doenitz forces in the Civil war.

Mission One: To Skin a Cat[edit]

On Stardate 2407.03.22 the Nimitz received orders from the Admiralty to conduct a snap raid on Cait Prime (Ferasa) with the objective of verifying the existence and destroying a Doenitz research facility believed to be developing biogenetically altered Caitians for use as Super-Soldiers.

Putting on a dazzling display of piloting skill Stanton slipped the Nimitz landing craft through Cait orbital defenses, and she and her crewmates were able to make contact with the two Starfleet officers as well as a local resistance group, the Caitain Liberation Force on stardate 2407.03.25 just outside the village of Chtarr.

Early the next morning the team struck a Caitain railway station and commandeered a train that supplied the research facility that was their main objective. Once within the facility Captain Devan Sash split the away team into two forces. The technical team comprised of mostly science and engineering officers whose responsibility was the retrieval of data and destruction of the facility itself. Stanton remained with the Security team remained under Sash and Nimitz Second Officer Lt(jg). Eric McDermott and attacked the facilities security detail neutralizing it and taking control of the illicit research facility.

With his security collapsing around him Professor Colton, a Doenitz confidant turned to a tortured and twisted being which he identified as Delta-Seven-Five, which launched a devastating telepathic attack upon the away team. Stanton was unfortunately one of the Nimitz crewmembers overwhelmed and she attacked Lt. McDermott who was forced to stun her.

This took Stanton out for the rest of the fight for the facility although she recovered enough to join her crewmates as they moved to return control of Cait to it's inhabitants.

With the facility neutralized and Caitain Liberation Force in danger of being overwhelmed on the surface, Stanton joined Sash and the others being transported to the surface. Fighting along side her crewmates she helped to achieve a hard fought victory, crushing the main garrison and its commander despite heavy losses to both the Caitain Liberation Force and the away team itself.

During the final battle the citizens of Cait, incensed and finally pushed too far by their oppressors rose up in mass and attacked the defending Doenitz garrison and thereby sealing its fate. 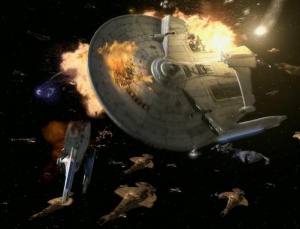 At the Helm of the Nimitz, Stanton guides the Nimitz into her final battle and is at the forefront of the fighting in the final battle of the Civil War. At the heart of the Mars Defense Perimeter, facing the heaviest defenses found anywhere in the Federation, Stanton is in her element as she guides the Nimitz through debris, fighter, and starship alike in a fight for freedom.

Facing one enemy formation after another Stanton and the Nimitz wade through the best Doenitz has to offer until Nimitz reaches the very threshhold of the MDP. Despire personal injury Leesa remains at the Conn until the bitter end when the Nimitz, critically damaged is finally abandoned.

Leesa refused to leave her station only through the intervention of a bridge security officer is she evacuated from the dying ship. Picked up by rescue teams of the USS Hades Stanton spends the remainder of the battle in the Hades Trauma Center. After the battle she is reassigned to the USS Hades during the interim after hostilities have come to an end. 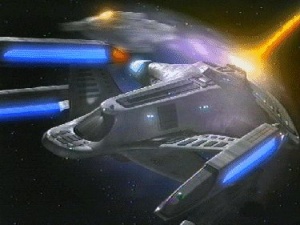 Stanton was assigned to the USS Hades NX 60367 on Stardate 2407.07.10 as an Assistant Operations Officer and a Conn Officer.

As one might expect Stanton is a voracious reader.

She also has a taste for fine clothing, jewelry, art and men. She plays the piano, paints, writes and enjoys opera.

Stardate 2407.03.07 injured during away mission on Ivor Prime. She suffered from three broken ribs, a punctured lung, a ruptured spleen, a concussion with no complications. She recovered fully.

Leesa is at her happiest when she is driving a starship. She very much lives for the here and now, enjoying life and wringing everything she can from it. With a busy social life she has no intention of settling down for one man and while the day may come when she is ready to settle down. That day is still some time away.

On Stardate 2407.03.04 she was awarded a Captains Commendation for taking part in the liberation of Deep Space 5 and the defense of the USS Champlain from the USS Wyvern.

On Stardate 2407.03.29 she was awarded a Combat Action Ribbon for services rendered in freeing Cait Prime for the Occupation of Doenitz forces and it's illegal and immoral experiments.

On stardate 2407.12.30 she was awarded both the Combat Action Ribbon and a Captain's Commendation for her part in the final battle against Doenitz forces in the Civil war.