Newsletter for the Star Trek: Freedom Wiki, Spring 2008 edition. To obtain a larger view of any of our pictures in this issue left click on the picture you wish to see. To post feedback click on the Discussion tab.

To see previous editions of the newsletter, visit The Archive

USS Spectre: The USS Spectre has been ordered by Fleet Command to the Class M world Ushar Prime, the home world of the Ushari, situated close to Theta Draconis & approximately midway between the Ferengi alliance & the Cardassian Union. It's mission now is to investigate why trade has suddenly ceased in regards essential Dilithium supplies. There are indications that the involvement of a new & possibly dangerous benefactor may have soured relations between the Federation & the Ushari. Whether or not this is the case however, remains to be seen.

On a diplomatic mission to the heart of the Romulan empire, the crew of the USS Hades are to establish a new treaty of peace on behalf of the Federation - a very grand task indeed. As they journey across the neutral zone, a disaster strikes and the Captain is critically injured in an explosion. The pressure is on for Commander Lemar to continue the mission in his stead, but with a Romulan Warbird off their port bow, one wrong move could mean intergalactic war. Can the crew hold it together and succeed?

The Boudicca's new Captain, Susan Rivers, is under orders to take the ship on a mission of exploration. Their first destination is the Tobias System, containing a planet with a pre-warp culture which is technologically analogous to mid-20th century Earth although with a very different sociological and political infrastructure. But the last survey of the system was some 40 years ago, and who knows what changes they may find?

When Prince Angkor Khamal of the Arturian people is kidnapped by Orion Pirates on his way to a peace conference that will finally end a 400 year long war, the USS Rosenante is ordered to proceed into Orion Space, locate the Prince and transport him to the Conference On Meldovia. With the lives of billions hanging in the balance and the very real prospect of War between the Orion Syndicate and the UFP if they are caught, can the crew of the Rosenante complete their mission?

With the USS Dennison severely damaged the crew is awaiting their fate at Star Base Geneva. However, there seems to be light at the end of the tunnel as the CO is told of this new ship that they could get, if they wouldn't mind losing 94% of their current crew. Will they? Won't they? Whatever the response, the (remaining) crew will find themselves in a situation that will tax their capabilities to the maximum. 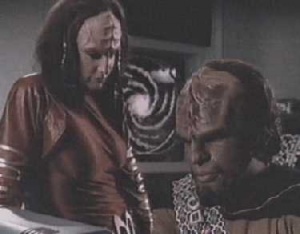 Insults are an important part of Klingon Society; the worst things that anyone can suggest to a Klingon warrior is that he is soft or a coward.

Klingons love a good fight; there's no denying that. They find honor in battle, and few things are more glorious than feeling your blood burn with the joy of conflict. But Klingons are pragmatic as well. It's not just feasible to go around killing people for minor offenses. Even Klingons refrain from casually taking a mek'leth and gutting someone for accidentally bumping them in the corridors. And yet, honor demands some kind of response, ideally one that won't cause a dramatic decrease in the Empire's population. The solution is Curse Warfare.

Don't misunderstand; it might be fatal. Curse Warfare (Mu'qaD veS) isn't simply unleasing a torrent of profanity on your opponent. There's no honor in being crude, no glory in sim