Romulan Starships are known to favour Disruptor weapons, rather than Phasers, and often use a mixture of photon torpedoes and plasma torpedoes. Larger ships, such as the Warbird, are known to possess an artificial quantum singularity reactor as a power source, rather than the matter/anti-matter reactor that is used in Starfleet vessels.

Little is actually known about the different classes of ship in the Romulan Fleet due to their dependance on cloaking technology to keep their assets secret. The following are a few ship classes know to exist to the Federation; 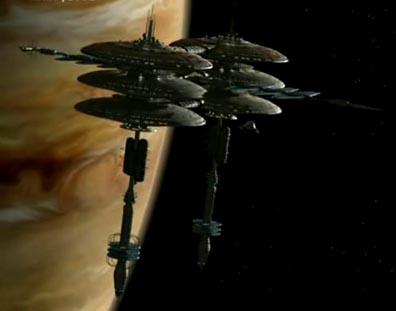 The Romulan D'deridex-class Warbird is also known to Starfleet as a B-Type Warbird. It is the standard Romulan battle cruiser throughout the latter half of the 24th century.

The Warbird is much larger than Starfleet's Galaxy-Class starships. It can reach high ward speeds, and is equipped with disruptor cannons and a cloacking device. According to Romulan commanders, the Warbird is more powerful than a Klingon Bird-of-Prey. Like most Romulan shps, the Warbird is birdlike in overall configuration, but is unusual inthat its upper and lower hills are seperated by an open space. The ship's hull is bright green.

First Recorded Sighting: 2364 Maximum Speed: Unknown - although not as fast as a Galaxy-Class starship due to the hull design.

The Reman warbird Scimitar was a massive warship constructed under the command of Shinzon as part of a secret plot to overthrow the Romulan Senate and liberate the subjugated natives of Remus.

The Scimitar was the keystone of Shinzon's plot to assassinate the Romulan Senate and assume the role of Praetor of the Romulan Star Empire, something he could not achieve without the support of the Romulan military. The Scimitar helped prove Shinzon's ambitions of attacking the Federation and ending the period of peace that had frustrated some Romulan generals.

First seen in 2268, these design of these battlecruisers is known to have been obtained from the Klingons during a breif alliance between the Romulan and Klingon empires.

In 2152, Starfleet briefly encountered this class. With its overall shape, the early Bird of Prey clearly influenced the design of the 23rd Century Romulan ships. The nacelles are similar to those on the Klingon Raptor class, suggesting a technology exchange. Warp drive and cloaking devices are already in use on these Romulan vessels.

This Romulan bird-of-prey was the successor of a 22nd century counterpart of similar design.

Starfleet first encountered this vessel in 2266, when a single ship of this type crossed the Romulan Neutral Zone and attacked several border outposts. The USS Enterprise responded to the alert and engaged in a tense game of cat-and-mouse with the intruder for more than ten hours, before the Bird-of-Prey was destroyed.

The Romulans later used larger numbers to patrol their border with the Federation in force. Typically during an incursion, one Bird-of-Prey will bring a starship out of warp with a plasma torpedo to allow the ships in its battle group to attack the target en masse.

The precursor to the modern Romulan warbird, the Raptor Class cruisers served as an intermediate platform for the development and prefection of several key components found in the later Warbird classes.

The vessel was well ahead of it's time and signified a distinct departure from the designs that that preceeded it. the implementation of improved weapons, shields, and propulsion allowed the raptor to out gun and out maneuver it's Federation counterparts. The addition of an improved claoking device made the already deadly vessel even more so.

The Romulan drone-ship was an advanced experimental attack starship, first seen in the 2150s. It is quite small in comparison to most known starships. The vessel is designed to be remotely controlled from afar.

The vessel was a formidable adversary in combat. Its weapons are very powerful, inflicting major damage on its targets. Its ability to self-repair proved an asset during battle, where damage could begin to be corrected almost immediately. The drone was highly maneuverable, capable of dodging photonic torpedoes with deft barrel rolls.

It is equipped with an advanced multi-spatial emitter system, which when activated allowed the ship to assume the appearance of nearly any other vessel. The drone-ship's disruptors were specially configured to mimic the weapon signature of a wide range of other ships.

The Romulan Shadow Class Interceptor was built as an early response vessel whose primary function was to respond to any breach of the Romulan Star Empire's borders.

This class of ship was primarily a faster version of the Cruisers that served as the backbone of the Romulan Fleet. The Romulan Navy significantly modified the core systems found in the Cruisers of the era and placed them inside a completely new hull configuration.

The class saw action with sterling results during the Orion-Romulan and Romulan Skorr Skirmishes of the late 2300s. The design proved to be resilient and flexible.

The Romulan Shrike Class Patrol Ship was designed to function as an internal policing and patrol vessel within the borders of the Romulan Star Empire.

The Shrike is by far one of the smallest capital classes in the Romulan Navy, but it is also the most numerous. The vessel's primary function is hunting pirates and smugglers within Romulan space as well as ptroling Space lanes and escort duties.

The Romulan science vessel is a class of ship known to be in service during the mid-24th century, which was used to conduct standard and experimental research.

The Romulan scoutship is a small starship used by the Empire for scouting missions during the late-24th century. They rarely venture out as far as the Romulan Neutral Zone. Very little is known about the capabilities of these vessels, including whether or not they were equipped with cloaking devices.

The Romulan shuttle was used by the Romulan Star Empire in the 2370s. They are approximately the same size as a Danube-class runabout. Romulan shuttles are also fitted with a cloaking device.

Every major Military organization in the known galaxy has a dedicated troop transport vessel, and the Romulan navy is no exception.

The Romulan version of the troop transport vessel is a heavily modified Klingon Troop Ship. The Primary modifications consist of better shields, weapons and engines.

These modifications do not make the vessel a match for any capital ship, however, when bunched in tight formations they are capable of withering fire that even the most stalwart capital vessel should be weary of.

The 22nd century Romulan warbird was the pinnacle of technology, during the height of the Romulan Empire's expansive period.

The UFP had very little interaction with this particular class of vessel during the height of this vessel's career. The primary reason for this was that the vessels were often deployed on the front lines of active combat units engaging against the neighbors of the RSE in the Beta Quadrant.

Several technologies found in the Modern Warbirds can trace their lineage directly back to these early models.

The Scorpion-class vessels were small attack fighters used aboard the Reman warbird Scimitar in 2379.

These small, mobile attack vessels were exceptionally maneuverable, so much so that they were able to maneuver through the interior corridors of a Reman warbird.

The vessel was extensively used during the campaigns conducted by Shinzon by the Romulan Star Empire prior to his self-arranged promotion to Praetor.

The vessels were armed with a pair of fixed forward facing disruptor cannons.

Similar in design to the D'deridex-class warbird, the Valdore type was a large, fixed-wing vessel, ranging in color from dark-green to brown.

With a wingspan roughly 900 meters wide, the vessel featured a large section extending forward to create a down-sloped head shape. Warp nacelles were connected at the end of each wing with impulse engines mounted aft. The hull was marked by distinctive "feather" shaped plating.

Every major spacefaring race in the known galaxy has a dedicated cargo transport vessel, and the Romulan Empire is no exception.

It is this hub that is connected to the aft of the tug. the cargo compartments are accessible by the tug's crew by way of the towing assembly. 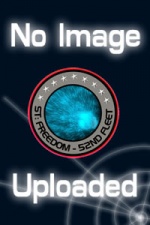