Parker is of average height and build for a human male. He usually wears a pleasant expression on his face but is extremely observant of his surroundings, and can often be seen looking around while walking. He gives off the impression of being easy going and easy to get along with.

Parker was raised by two supportive and loving adoptive parents. His biological parents gave him up for adoption willingly after he was first born, knowing that they did not have the means to support him and that he would be raised by state programs for children of unfit parents if they did not enter him into the adoption system. Trisha and Charlie Davis did not have extravagant means themselves, living in a lower-class (by Earth standards) neighborhood on the East side of Detroit. Charlie was a construction worker and Trisha was a nurse at the time. However limited their means, they were committed to giving Parker the best opportunities they could. When Parker was 13, his father Charlie was involved in an accident at a construction site in East Lansing, Michigan. He was killed in an equipment explosion. Parker was devastated, and Trisha saw his grades spiral and her normally upbeat, intelligent boy start to gravitate towards the wrong crowd and act out. Two years later, at age 15, he was involved in an armed robbery at a local diner that escalated to a manslaughter. One of the boys in his company fired a shot with his phaser, not realizing the setting was on 'kill' instead of 'stun'. The boys, ages 13 to 16, were tried as juveniles. Their story was confirmed by the diner's security camera, which recorded the audio and video of the entire incident. Parker was sentenced to two years in the J. Samuel Detroit Juvenile Detention Center, where he received counseling and finished his secondary school education with flying colors. He had made a remarkable recovery. While there, Parker found the religion of Christianity very enticing while in a Historic World Religions class and devoted his life to serving God.

In 2414, Parker was assigned by BUPERS to be Captain Ahmed Ibn Salid's temporary Chief Counselor, until the Captain could select a counselor of his own. Because the Rosenante crew had recently been through a traumatic event, BUPERS felt the starship needed a counselor immediately, and selected Parker because of his extensive background in trauma.

He reportedly spent time with the Captain in Sickbay after Salid was rescued from his planned capture by Section 31 Operative George Hayden, Jr. However, no record of this conversation exists.

When the Rosenante discovered a rogue planet--a planet without a solar system--headed for a pre-warp inhabited planet, Salid ordered an away team to the inhabited planet to determine if the Prime Directive would be violated if they were to enact a rescue plan for the civilization. Parker compiled a list of officers who volunteered for the mission, and although he had serious misgivings about the mission and how they were treading dangerously close to a violation of the Prime Directive, Parker volunteered to go on the mission himself. He hoped he could offer his behavioral profiling skills to investigate the culture on the planet.

Before their departure, Lieutenant JG Tayla Fraiser and he started dating after they hit it off during her mandatory psychological evaluation. Parker eventually told her the elaborate story of his past, focusing particularly on the violent incident that led to his 'conversion' and realization that he needed to do something meaningful with his life.

After this, Parker was appointed Second in Command of the away mission to the surface and the team beamed down for twenty days of study in Celdebrai City. Parker and Tayla played Ahmed Ibn Salid's son and daughter-in-law, respectively. 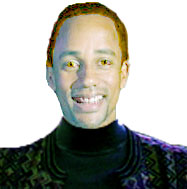 Parker and Tayla discovered a hospital in the city and decided that it would be a good gauge of the society's technological and social advancements to observe this establishment.

It was there that Tayla discovered a boy who was suffering from epilepsy, and wished to heal him. In their subsequent argument over the issue, Parker was forced to order Tayla not to heal the boy for fear of risking the mission, and Tayla ran out of their inn room, crying. Salid ran after her, and it was shortly after this that they were arrested and imprisoned by local authorities. The turn of events left Parker in command, a command that was fraught with lack of confidence and distinct feelings of worry, inadequacy, and guilt. He managed to delegate the responsibilities of coordinating a rescue mission to the appropriate away mission team members, and in the progress of the rescue mission, Parker discovered that he and Tayla had a telepathic bond that was projecting her emotions onto him.

As soon as she was rescued, he was much better able to focus and command. This came as both a relief and a point of contention, as Tayla was the reason why he was unable to focus during the mission and effectively lead. He later felt obligated to bring this to Captain Salid's attention, and was formally reprimanded and held back from promotion with a formal letter in his file that would only be removed when he had proven himself to the Captain again. This hit the counselor hard, especially given his background with punishment and consequences for behavior.

But in the mean time, during the final part of their mission, Parker was able to fight and kill The Voice, the lead religious figure on Asrai, before the weapon that would have destroyed the approaching rogue planet could be fired from Asrai Prime. All returned safely to the Rosenante.

As a way of cooling down after the last mission, the Captain organized a cotillion which Parker was pleased to attend with Tayla. Despite their recent difficulties due to her telepathic bond with him, they were able to overcome it through a trip to the Detroit Henry Ford Museum and Greenfield Village via a holodeck, where they engaged in a telepathic session and Parker built a wall with a door in it, so only when the door was open could she enter his thoughts.

For the cotillion, Parker attended in a traditional tuxedo. 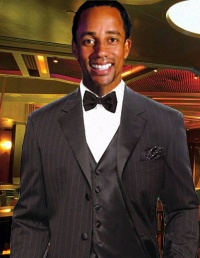 Parker dressed up in a tuxedo for the cotillion

Parker's stay at the juvenile detention center is considered psychological medical history. He occasionally suffers from migraine headaches, but they are under control with modern medicine.

Parker is an expert in psychological trauma treatment and has extensive experience working with incarcerated individuals. He is very good at relating to people. He loves to 'people watch' and guess what people are going through. He is not an empath, but people sometimes mistake him for being part Betazoid because of his dark eyes and ability to accurately determine how people feel. He is also very good at profiling, and has completed several criminal profiles for Starfleet in the past.

Parker is interested in American History and Mars History, as both won their independence from a larger power. He loves reading, and mostly reads encouraging, motivational, or spiritual works. He is also a fan of rock climbing and free running, a city sport.