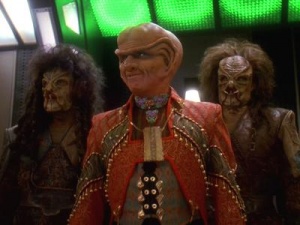 Quol Nor and a pair of Nausicaan Enforcers

Quol Nor is an Ferengi businessman who owns and operates a monopoly of holosuites on Starbase 989. It was suspected that he was an expert at gathering illicit information from his programs as well as actively participating in an undergroup information smuggling ring. he was a known expert in Holographic programming.

In 2413, Captain Joseph Taylor was found murdered in his quarters, and Quol Nor became a suspect. It was believed that he had somehow been involved in a sale or theft of information that had gone terribly wrong and threatened Quol Nor's safety.

This suspicion was discovered to be true. With the aid of some information provided by the Romulan captain of the Harveq, T'Sek, investigators were able to firmly establish a motive. A detailed trap was put into place which called for Quol Nor to send his Assassin Hologram to recover the stolen Data Cube.

The Ferengi complied and his hologram was neutralized by the investigators. Quol Nor was arrested on Starbase 989, and sentenced by a Federation judge to thirty years in a penal facility.

Quol Nor was first seen in the USS Rosenante Mission: Touch of the Eidolon