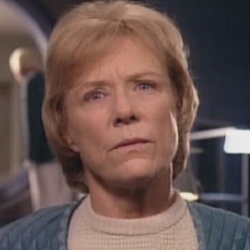 Doctor Lawson was a renowned expert in the field of Borg nanoprobes. The doctor Retired to Davros III after her young daughter Amanda was diagnosed with a deadly and incurable disease.

in 2407 Doctor Lawson contracted with the Ferengi to steal a sample of Borg nanoprobes for her research. Her plan was to modify the probes to repair the cellular damage in her daughter and halt and even possibly reverse the disease that was slowly claiming her life.

In stead of normal Borg nanoprobes however, the Ferengi stole a sample of the Matron Nanoviral Pool from the Opthidians.

This resulted in Doctor Lawson's unexpected release of the colony into the Davros III population which resulted in the death of all 3500 colonists as well as the deaths of the crew of the Sky of Tomorrow.

Doctor Lawson was killed by the colony that she had helped to release.