Remae Ktell is a former Commanding Officer of the USS Spectre. Remae is well known for crashing his ships into planets, being more Starfleet than Bajoran and for his unusual command style. 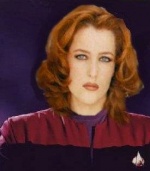 Remae is tall and seems to be more suited to a security officer, but has the demur that comes from years of counselling others. His experiences at the hands of Starfleet, being dealt badly by losing contact with his fiance, Jana Bell has twisted Remae into something quite else. The burden of what he has done and gone through makes his presence formidable.

Worked on farm with his parents on Bajor but normally spent his time at a nearby Federation shuttle repair facility. He is a contradiction, being Bajoran but his faith his almost non-existent... something his parents blamed on his exposure to Starfleet and their 'godless' values. Over the years, he has reassessed his faith. Still Atypical, allowing anyone to call him by his first name or last, depending on what they want to do.

Remae spent his early life on Bajor, devoted to family and friends. Remae spent his time on Bajor at Valour province, during this time at his parent's farm, he spent more time at the local Starfleet Installation for the province. Hanging around watching the Federation in action, Remae steeled himself to one day join Starfleet. Remae spent many years in command of the USS Spectre but he has traveled through 2 dimensions and ended up in a very different place that when he started. He has been court-marshalled, up and down the ranks from Ensign to Captain and back again, had more than his fair share of Commands and ended up back on the Spectre in charge of Engineering.

Early in his career, Remae caught the attention of Q, he loved to mess around with Remae and placed him in the wormhole to confront his atheist views.

Remae ran across more than a couple of orbs of the prophets, strangely, the orbs contacted Remae by placing themselves inside his chest... this contact directly linked Remae with the Prophets

This is far from complete, I lost my emails pre 2006 so there is a 5 year gap and I've done what I can from memory!

Remae was accelerated onto the USS Spectre with minimum time at the Academy.

Assigned to the Spectre from the Academy, he was given the position of Counsellor. The CO at the time, another Bajoran, Captain Ro was none too happy to have a Counsellor onboard. He skipped through the ranks quickly, rising to FO for a short period and then to CO. The Spectre was nearly destroyed and the First Officer, Susan Rivers took the Saucer not before Remae went on his own, to confront the madman Gul Dulon before he could get his ships to the Saucer Section. The engineering section was destroyed. Note: The Spectre was not designed for saucer separation.

During a counselling session while serving on the USS Mystique on stardate 2407.01.13, Remae began to open up his past regarding the USS Athene, Admiral Kriller and Jana Bell. He mentioned his sadness about not being able to return to her. Fate had prevented his return Since the loss of the Spectre in that universe, Starfleet had made him pay a high price and even following him into a new universe and dimension, Remae's fate haunts him. Remae took the Athene on her version mission. I don't think anything was resolved.

While in another universe, Remae was assigned to the USS Firebrande at Utopia Planita but this was too different for him and he made an attempt to get back to where he belonged.

“Computer, prepare to activate the Geometry Drive.”, he said as he entered the entry and exit points close to the red giant, everything has been calculated long before he had stepping onto the ship, all he needed to do was engage the drive.

The core shutdown and began to turn… it was like watching the hands of a clock move, it was slow. With the core offline, the ship was decelerating but it wasn’t too long before it connected to its second set of injectors, the core came back to life, it was at a strange angle but it was powered up again.

Remae turned on a monitor, it showed the forward view of the ship, a beam of energy was shooting out the front, from the dish, it was digging into subspace and before Remae knew what had happened, the beam had opened a hole in space, the Firebrande was inside the wormhole, inside the blue vortex travelling at quite a speed.

Something shook the ship, it slammed Remae into the wall… whatever was happening, it was taking over his existence, white was engulfing him and he passed out.

Remae made it, not to his own universe but yet another where he was assigned to the USS Paladin as First Officer. After another awkward meeting with command when he returned, Remae was assigned mainly due to the need of experienced officers lacking.

Currently on the USS Spectre[edit]

Remae has returned to his beloved USS Spectre once again but not in a command position. Currently at the rank of Lt SG, Remae is the Chief of Engineering. Recently, he took on the additional position of Acting FO.

Over the years, recent encounters with the Orbs of the Prophets have become normal. On these rare occassions, the Orbs have lodged themselves inside Remae's chest and connected him directly to the Prophets.

Remae lost both his legs thanks to a mine on Betazed, during the Civil War. Although they work properly and noone can tell the difference, Remae has to cooperate with the legs to make them work, this doesn't always happen.

Listening and helping others with problems. Patience and the ability to assess someones personality within minutes of a conversation. People skills.

He grew up with his parents' knowledge of the Cardassian occupation and spent time during the recent Dominion invasion helping family and friends through their traumatic experiences. His three visits from Q have usually been more trouble than they are worth. But his visits and visitations from The Prophets have shaken his beliefs of having no faith to reassessing those values.