"I was once told that the Galaxy is too big for any one person to see everything. That may be true but it sure isn’t going to stop me from trying!"
— {{{2}}}

Roderick McDermott was born to Grace and Irving McDermott on Stardate 2355.04.19 in Portsmouth, Ohio, Terra. Brought up as a country boy Roderick was completely uninterested in staying home and taking over the family farm.

Excelling in school he showed an aptitude for math, engineering and the sciences. Winning a scholarship at sixteen he went to M.I.T. earning a Masters degree in Astrophysics in just four and a half years. McDermott took six months off to visit his family and to decide on a career.

Unfortunately during that time he began having problems getting along with his father who wasn’t pleased with his son’s decision to leave the farm. A bitter argument resulted in McDermott leaving abruptly. Two days later he began the process of applying to Starfleet Academy.

While in the Academy McDermott Majored in Astrometrics, Advanced Physics and Advanced Planetary Geology.

McDermott’s main interest was in the sciences but he also showed and aptitude for tactics and strategy and despite his misgivings he was placed in a number of strategy and tactics courses in order to round out his training.

McDermott consistently scored well with hand held weapons and achieved a black belt Ju Jitsu. His sheer physical size makes him a dangerous opponent in a hand-to-hand situation and he often fails to recognize his own strength.

McDermott was assigned to the USS Thetis upon graduation from the Academy as its Astrometrics Officer.

While on the Thetis, McDermott was promoted to Ensign (sg) and Lieutenant (jg) and upon his transfer he was the ships Assistant Chief Science Officer.

McDermott’s time on the Thetis was one of discoveries. The Thetis was primarily a science vessel and during his time aboard her McDermott spent much of his time helping to map out unexplored areas of space and studying the Beta Sagittarius star cluster which was noted for a number of binary and trinary star systems. 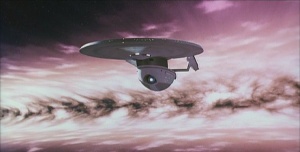 McDermott was assigned to the USS Hera as its Assistant Chief Science Officer.

While on the Hera, McDermott was promoted to full Lieutenant and Lt. Commander. Upon his transfer he was the Chief Science officer.

As with the Triton the Hera was primarily a science vessel and her mission profile was one of exploration and discovery. During this time period the Hera was heavily involved in studying a number of star systems near the Bajoran system that appeared to have once been inhabited. At the time there was speculation that these civilizations might have actually been Bajoran. It is a mystery that still persists to this day.

It was also during this time that McDermott was reunited with an old friend from his Academy days, Stanford A. Evers. Evers had been two years behind McDermott at the Academy but that fact did not prevent them from becoming life long friends.

Also during this time period McDermott saw combat for the first time as during the course of her research the Hera was attacked by a Cardassian Keldon class Warship. After a grueling battle in which both vessels were battered to shattered wrecks floating in space, the Cardassian’s attempted to board and capture the Hera.

With the Chief Tactical officer and First Officer dead, McDermott helped lead the defense of the ship defeating the invaders and capturing the survivors. For his actions in defending the ship McDermott was awarded a Combat Action Ribbon.

Despite having won the battle the Hera was simply too badly damaged to be returned to service. After being towed back to Terra she was decommissioned and scrapped.

McDermott returned to Starfleet Academy as an instructor in the Academy’s Science department. During his time there he presided over numerous classes and helped train hundreds of young cadets who would be future science officers.

While teaching at the Academy McDermott gained a reputation as an excellent teacher who was both firm but fair. He also served as a career counselor and on numerous occasions led students in various research projects, making new discoveries in quantum physics, DNA, genetic manipulation and warp theory.

It was also during this time that McDermott met Wilhelmina Devries which resulted in the conception of a son which he would not know about until years later.

McDermott was assigned to the USS Agamemnon as its Chief Science Officer.

While on the Agamemnon McDermott was promoted to full Commander. McDermott served as the Agamemnon’s Second officer and upon his promotion became its First Officer.

The Agamemnon was the first vessel McDermott served on that was not primarily an explorer/science vessel. Initially he was not pleased with the assignment as the Agamemnon’s mission profile during this time was patrolling the Federation border near Breen space. Breen raiders had been striking at numerous Federation colonies and member worlds in the area and the Agamemnon spent much of it’s time fighting a half dozen sharp battles up and down the border.

McDermott’s Captain, Sandra Denton, saw more to him than just a science officer however and she pushed him into the Second Officers position despite his protests. By the time McDermott was promoted to Commander, he had taken over as First Officer and been awarded with a Captains Commendation for his performance during a particularly vicious battle with a Breen Battle Cruiser.

Despite the close personal relationship that McDermott shared with Captain Denton, he chose to accept a transfer to his next assignment when the next duty rotation occurred. While both Denton and McDermott were saddened by the necessity, both were career officers who put their careers over their personal lives.

McDermott was assigned to the USS Venture as its First Officer.

At the end of his tour on the Venture, McDermott was promoted to Captain and was given his own command.

The Venture again reunited McDermott with his old friend Stanford A. Evers and as in the past they served together to great affect. The Venture returned McDermott to the role that he preferred and was used to. That of a ship primarily concerned with science and exploration. During his time aboard, the Venture discovered and studied a total of seven black holes located at the center of the giant Bentarra Nebula and observed the Alpha Hydri seven Super Nova.

As one might expect however a Galaxy class vessel could not always be expected to remain on a mission of exploration and the Venture was no different being called to mediate various disputes including a border clash between the Romulan and Klingon Empires.

During this dispute the Romulans characteristically resorted to treachery and in a sneak attack badly damaged the Venture and critically injuring Captain Sandusky. McDermott took command and in a fourteen hour long running battle destroyed the Romulan D’Deridex class Warbird responsible for the attack.

While the mission was considered a failure from the point that a peaceful resolution could not be found, McDermott was awarded a Squadron Commanders Commendation for his actions during the battle and he remained in command of the Venture until Captain Sandusky recovered from his wounds.

As might be expected after the successful action against the Romulans, McDermott was offered his own command and a promotion to Captain only a few months later.

McDermott was on his way to take over his new command when the Venture disappeared with all hands presumed lost.

The Resolve was an Ambassador Class vessel heavily modified and retrofitted with some of the newest technology available for service as a dedicated science vessel. As such she was the perfect vessel for an explorer like Roderick McDermott and it is likely that it was for that reason he was chosen to command her.

Tragically the Resolve was lost only four weeks after the disappearance of the Venture.

As all records on these two incidents are sealed at this point, it is not likely that the truth will come out any time soon, if ever. 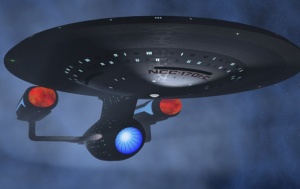 The Son He Never Knew:[edit]

Perhaps the greatest tragedy of the loss of Roderick McDermott is the fact that he discovered only two weeks before his death that he had a son.

Sixteen years earlier while he was stationed on Terra serving as an instructor at the Academy, McDermott met Wilhelmina Devries one evening at a party. The two spent one night together after which, Devries left Terra only two days later as she was serving as the Helm officer aboard a tramp freighter. Neither knew that a child had been conceived that night.

It was not until young Eric McDermott had become a ward of the state that an investigation into his past, matched his DNA, with that of Roderick, proving that Roderick was the father.

Roderick was only able to send one message to his son before his disappearance, never having a chance to receive a reply from the son he never knew he had.

As might be expected from such a scholarly man McDermott is a voracious reader. He enjoys games of chance and card games such as poker, blackjack and euchre. He spends time on the Holodeck rock and mountain climbing, scuba diving and exploring ancient ruins.

Despite the length of his career McDermott has never been seriously injured and is in excellent health.

McDermott is missing in action and presumed dead.