Emblem of the Tal Shiar

The Tal Shiar is the elite Intelligence organisation of the Romulan Star Empire. It is a highly respected and feared organization whose main objective is to enforce loyalty of Romulan citizens to the government and obtain enemy secrets, most notably from the Federation and the Klingon Empire. Their presence is often undetectable and their methods covert. At times, the operations of the Tal Shiar goes above the control of the government itself, as the agents themselves have the power to overrule the direct authority of most military commanders, which they utilize with little fear of reprisal.

It has been said that “...in order to function, military officers have to trust each other. Members of the Tal Shiar, on the other hand, trust no one. They expect deception, so they always find it.”’ 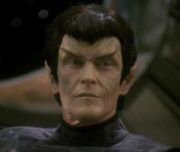 Unlike the Federations Section 31, the Tal Shiar do not cover up it's existence, and even has a representative in the Romulan Senate. This representative is currently the head of the organisation, Chairman Vaebn.

Although he is not a very popular Romulan, he commands the respect he requires through fear. Because operatives of the Tal Shiar have the ability to over-ride the decisions of Romulan Military Commanders, both Vaebn and the Tal Shiar remain deeply unpopular with the Romulan Military, as well as with the Praetor himself.

The Tal Shiar have always been involved in a number of plots to destabilize their enemies. In 2366 and 2367, they attempted to influence Klingon politics in the wake of Chancellor K’mpec’s death, secretly backing an attempt by the Duras family to seize power from K’mpec’s legal successor, Gowron.

A few months later, Tal Shiar operatives, including Sela, were active on Qo'noS as the Klingon Empire is plunged into civil war. The Tal Shiar delivered supplies to the Duras family’s forces, but the Federation intervened, disrupting their operation and helping Gowron to defeat his enemies. 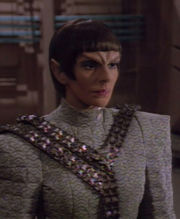 This is a particularly aggressive period in the Tal Shiar’s history, and shortly afterward they attempted an invasion of Vulcan. The Tal Shiar used Senator Pardek, an operative who has posed as a reformer for several decades, to lure Ambassador Spock to Romulus. Meanwhile, they also acquired three Vulcan ships. They captured Spock and tried force him to announce a peace initiative, but the plan, which was again supervised by Sela, failed and the Tal Shiar decided to destroy their own invasion force of more than 20,000 troops rather than allow them be captured.

First hand information about the Tal Shiar is gathered by Counsellor Deanna Troi when she was kidnapped and taken to the Imperial Romulan Warbird Khazara, where she was forced to pose as a Tal Shiar Major Rakal. As she entered the crew’s presence, the Betazoid feels their off-the-scale anxiety and then, as she left, their massive relief.

The ship’s commander, Toreth, hates the Tal Shiar more than she fears them, because when she was a child they dragged her beloved father out of the house and into the darkness.

The Shiar’s power is such that when one of their officers issues orders that violate Romulan law, a crew will still obey.

The Tal Shiar regularly employ Flaxian assassins. In 2371, an operative named Retaya arrived on Deep Space Nine. His target was a Cardassian resident, Elim Garek. The chief of security discovered the assassins intentions, interrogated him, and then escorted him to the airlock. As his ships left, it suddenly exploded. Analysis showed that a forced neutrino invertor bomb, of the type preferred by the Romulans, destroyed the craft. The Tal Shiar admited their involvement, but excuse the incident as a lawful execution of a convicted criminal and repudiate any involvement in an assassination plot. 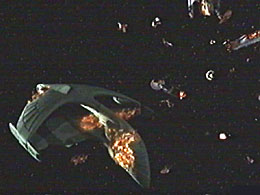 Battle at the Omarion Nebula

In 2371, the Tal Shiar join forces with their Cardassian equivalent, the Obsidian Order, in an attempt to launch a surprise offensive against the Founders. A fleet of warships is secretly gathered in the Orion sector, but the attacking forces were ambushed by a huge fleet of Jem'Hadar ships in the Omarion Nebula. This crushing defeat left the Romulan Star Empire in a vulnerable position, and led to a major re-evaluation of Romulan strategy.