Technical Specifications for the USS Rosenanté 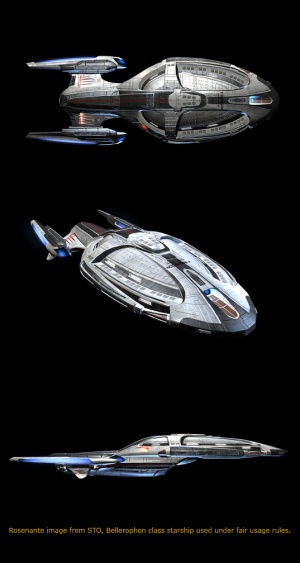 The Rosenanté class of Starships entered service in late 2407. Her original design however, was not one of exploration. It was one of espionage. The Long Civil War that raged between the Doenitz Loyalists and the 52nd fleet was beginning to take its toll. Doenitz, frustrated over the lack of reliable intelligence on the Enemy fleet ordered the creation of a new class of vessel. The Chimera Directive outlined the requirements for such a class of ship and the Rosenanté was the culmination of that initiative. Initial production of the Rosenanté class starship began at the Advanced Starship Design Bureau Integration Facility at Utopia Planitia, Mars.

Fate however had another surprise in store for the Rosenanté. Before her construction could be completed, the 52nd fleet launched a daring attack against Sector 001 and defeated the forces of Admiral Doenitz. The Rosenanté was captured before she ever left space dock.

The new ship was reclassified as a Explorer. Her offensive capabilities were sufficient for the tactical roles normally assigned to Heavy Cruisers, and her equipment and support capabilities also sufficient for long-term independent operations in unexplored regions of space.

There were several new and experimental systems installed in this new class of vessel. Among them was a revolutionary new Stealth system, improved sensor arrays, Dual Warp cores, an experimental Spiral Warp drive and several modifications to the computer systems and security systems implemented on the vessel.

Because of her unique modifications to her saucer and engineering hulls , which represents a significant departure from established Starfleet designs, the Rosenanté class starship is easily recognizable. This vessel’s unique hull geometry allows atmospheric re-entry and she is capable of landing on the surface of most planets without danger of structural collapse.

The Rosenanté class is just commissioned. The Prototype ship the USS Rosenanté, NCC–924650 is, at this time the only ship of the class. She was commanded by Captain Susan Rivers and was launched on stardate 2408.01.07

On Stardate 2408.02.15, Captain Rivers was reassigned to the USS Boudicca and Captain Ahmed Ibn Salid was assigned as the Rosenante's Commanding Officer. 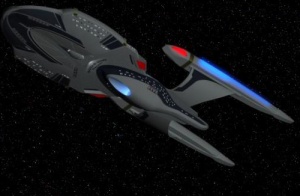 This vessel is not capable of separation.

The Rosenanté class starship was designed with Atmospheric flight and planetary landings to be possible. The vessels aerodynamic shape allows for excellent atmospheric stability and moderate Maneuverability. The vessel is equipped with a dual nose landing strut and two dual aft landing struts off-center midline for support. The hull shape also allows for a water landing and requires forcefields to maintain it’s structural integrity while operating in most gravity wells.

All images compliments of Roger Wackowski