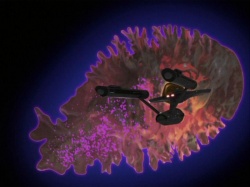 This Space Amoeba is 11,000km long and surrounded by an energy dampening field

Diverted to investigate, the Enterprise encounters a "zone of darkness," an area of space so black not even starlight penetrates through. The zone also appears to have an strong attractive force about it. Passive means of gathering information, such as sensors and probes, are ineffective as no data comes back from the zone, just a loud noise, like feedback from a sound system. Finally, Kirk decides to penetrate the zone. Once inside, the attractive force appears to grow stronger, pulling the Enterprise towards the center. In addition, energy is being drained from both the ship and the crew; McCoy orders stimulants to keep everybody going.

"Captain’s log, stardate 4308.8. It is now 10 minutes since we entered the zone of darkness. We have stopped engines while we seek a defense against the energy drain which seems to pervade the zone."

The crew also finds that normal laws of physics seem to be reversed within the zone. Reverse thrust, for example, creates forward motion. Forward thrust is ordered, which slows (but does not stop) the forward motion. As the Enterprise penetrates deeper into the zone, the mystery is revealed at its center – an 11,000 mile long, single-celled creature, which apparently radiates the zone as a protective covering. A quick analysis reveals the creature to feed on energy, explaining the drain on machines and lifeforms. The entity must be destroyed in order to save the ship and crew, but more information is needed.

A shuttlecraft is fitted with special instruments to take detailed readings from inside the creature itself. Both Spock and McCoy volunteer for the mission, despite the fact that it is almost certain death for the one selected. The confrontation between both men, each an expert in his own way, leaves Kirk with an agonizing choice.

"Captain's personal log, stardate 4309.2. We have established that the thing which destroyed the USS Intrepid and the Gamma 7A system is an incredibly huge but simple cellular being whose energies are totally destructive to all known life. Both Mr. Spock and Dr. McCoy have volunteered to go in a specially equipped shuttlecraft to penetrate the cell, find a way to destroy it, and free the ship. Dr. McCoy has the medical, biological knowledge. Mr. Spock... is better-suited physically and emotionally to stand the stress. Both are right, both are capable... and which of my friends do I condemn to death?"

Finally, he decides: "I'm sorry Mr. Spock; you're best qualified to go." Once inside, Spock sends back telemetry, but his power systems rapidly fade. His last transmission informs the crew that the chromosomes of the creature are lining up in an apparent first step toward dividing – the creature is preparing to reproduce. Spock radios back how to destroy the creature, but his transmissions are increasingly garbled and unintelligible.

"Captain’s log, stardate 4309.4. We have determined we can destroy the creature, provided we can do it from inside the organism. Spock clearly knew how to destroy it, but was unable to transmit that information."

Fearing Spock to be dead, Kirk and McCoy reflect over what he was trying to say. Kirk makes the observation that when the creature divides, the Enterprise will be like an invading virus; McCoy is fascinated by the idea of being antibodies of their own galaxy. The analogy gives Kirk an idea – use a charge of antimatter in the chromosome body to destroy the entity. The ship goes into the creature itself, and a probe with the antimatter charge is implanted at point-blank range to prevent currents in the protoplasm from carrying it away from its target.

"Personal log, Commander Spock, USS Enterprise. I have noted the passage of the Enterprise... on its way to whatever awaits it. If this record should survive me, I wish it known that I bequeath my highest commendation and testimonial to the captain, officers, and crew of the Enterprise... the finest starship in the fleet."

(Log entry made by Captain James T. Kirk of the USS Enterprise) "We have arrived at the chromosome body... in the nucleus of the organism. If we should fail in our attempt to destroy it, or be unable to free ourselves, I wish to record my recommendations for the following personnel, that they receive special citation - Lieutenant Commander Leonard McCoy, Lieutenant Commander Montgomery Scott, Officers Chekov, Kyle, Uhura, and my highest commendation for Commander Spock, science officer, who gave his life in the performance of his duty."

Power levels are quickly dropping, however, and the ship backs out of the creature. As it does so, however, sensors pick up the shuttlecraft with Spock still alive. Despite the power drain (and Spock's protests), tractor beams are activated. Power levels read dead as the charge explodes, just before the Enterprise exits the creature. Both the ship and shuttlecraft are thrown clear, with power levels restored. As Spock and McCoy argue over which tests were performed satisfactorily, the shuttlecraft is brought back aboard and the Enterprise resumes its course for shore leave.