Species 8472 was the Borg designation for a tripedal non-humanoid species whose actual name is unknown. 8472 was first encountered by the Federation starship USS Voyager in the Delta Quadrant in 2373. The species originates from a dimension called fluidic space, accessible by quantum singularities. (VOY: "Scorpion", "Scorpion, Part II") They are believed by the Borg to be the ultimate form of biological evolution.

In their search for further species worthy of assimilation, the Borg first encountered Species 8472 after they found a way to enter fluidic space in the 2370s. However, Species 8472 turned out to be immune to the Borg's assimilation attempts and the invasion of their realm provoked a war, which quickly evolved into the first real threat the Borg had faced, and according to Seven of Nine, was the first species to offer "true resistance to the Borg". With their superior technology, Species 8472 was able to annihilate large numbers of Borg and their ships and even planets. Species 8472 was forced to retreat when the crew of Voyager armed warheads with modified nanoprobes capable of destroying their bioships. (VOY: "Scorpion", "Scorpion, Part II", "Prey")

When they retreated to fluidic space, one member of Species 8472 was left behind and was relentlessly hunted by a group of Hirogen hunters for several months. This individual was later rescued by the crew of Voyager, and Captain Kathryn Janeway intended to return it to fluidic space. Seven of Nine, however, refused to open a rift to Species 8472's realm. Shortly afterwards, in a struggle with one of the Hirogen hunters aboard Voyager, Seven of Nine took the opportunity, in defiance of Janeway's orders, to transport the individual to the Hirogen starships, which then broke off their attack. (VOY: "Prey")

Concerned about the threat posed by Humanity with its modified nanoprobe-warheads, Species 8472 created a simulation of Starfleet Headquarters on Earth inside a Species 8472 terrasphere in the Delta Quadrant as a training ground for a potential infiltration of the Federation, modifying many of their kind to look like Alpha Quadrant species. Their main goal was to uncover if the Federation is planning an invasion of their realm. However, they made a few major inconsistencies, such as Ferengi in Starfleet or obsolete uniforms. Some were completely uncomfortable with the fact they were in the forms of "inferior" lifeforms, who need to eat, sleep and were unable to communicate telepathically. However, the Voyager crew discovered one of their training grounds, having found transmissions with a Federation signature, which took them a week to track. When discovered, Species 8472 captured Commander Chakotay, Voyager's first officer and believed that a fleet was on its way. Voyager managed to convince Species 8472 that the Federation had no hostile intention toward them by giving them their modified nanoprobe warheads in hope that Species 8472 could adapt their vessels in exchange for their techniques on how to look human. (VOY: "In the Flesh")

The Borg continued to patrol a border between our galaxy and fluidic space. Axum suggested that he would try to make contact with Species 8472 after he was liberated from "Unimatrix Zero". (VOY: "Unimatrix Zero, Part II")

Species 8472 is tripedal, around three meters tall, extremely muscular, and biologically unique. Their DNA is arranged in a triple helix formation, and is the most densely coded DNA ever encountered by Starfleet. They are known to have as many as five sexes. The species' immune system is able to destroy anything which penetrates their body systems: chemical, biological, or technological. They are impervious to normal Borg assimilation methods. Their immune system can even be used as a means of attack. If cornered they attack with their claws rather than with any other type of weapon allowing Species 8472's cells to come into contact with a victim's where they will infect every system and consume it from the inside out. In addition, if threatened, Species 8472 are able to commit suicide by releasing a cellular toxin into their bloodstreams. They emit a biogenic field around their bodies; this field renders them nearly invisible to sensors, making it impossible to pinpoint their exact location. This field also interferes with normal transporters. Exactly how this biogenic field is produced is unknown.

Physiologically, Species 8472 is non-humanoid. They are able to withstand the vacuum of space. It is probable that in fluidic space they are able to swim through the organic matter similar to their ships, which share their unique physiology. They communicate exclusively via telepathy. Kes was able to make contact with Species 8472 while they were in conflict with the Borg; they vowed that 'the weak will perish'. With their dense musculature and increased height, Species 8472 possess great flexibility and can move much faster than either humanoids or Borg. They are able to penetrate force fields and rip through bulkheads with apparent ease.

They have very little soft tissue, and much of their skeleton is exposed, particularly around their necks. Species 8472 does appear to have nostrils, suggesting a sense of smell; however, they possess no ears or mouth and have distinctive cross-shaped pupils. They appear purple to green depending on the lighting. It is not known if Species 8472 is the only species to have evolved in fluidic space or if they exterminated the others as they attempted to do in normal space.

In conjunction with the Borg, The Doctor developed modified nanoprobes which were able to effectively combat Species 8472 and their bioships. The nanoprobes could be modified to either kill or sedate the creatures. (VOY: "Scorpion", "Scorpion, Part II", "In the Flesh", "Someone to Watch Over Me"; Star Trek: The Magazine Volume 1, Issue 5)

Additionally, he explained that Species 8472 appears to have as many as five sexes. (VOY: "Someone to Watch Over Me") 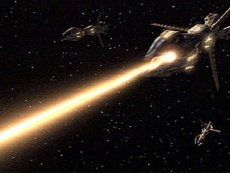 The bioships used by Species 8472 are very advanced and share their unique genetic makeup. They are living organic vessels capable of warp speed, and are very heavily armed and shielded. Inside, the walls and floor appear to be flesh; spider web-like material is used in place of an EPS system. The structural supports are made of bone. The ship's computer is similar to a nervous system and uses neuropeptides. The ships are native to fluidic space and are able to function as well in the organic matter of fluid space as they are in the vacuum of normal space. They are also equipped to detect the pressure wave created when a vessel crosses into fluidic space from normal space.

A bioship carries only one crew member, who acts as the pilot. Its hull is resistant to conventional weaponry, including Borg assimilation, and also reflects sensor scans and tractor beams. The bioships are armed with energy beam weapons. Although the beam appears less coherent than either Starfleet or Borg weapons, it is able to inflict greater damage; Voyager was knocked off course by a beam that just missed it. Nine bioships can combine their firepower using an energy focusing ship, forming a planet killer.

It is unknown whether the ships evolved naturally or if they were engineered to fit their task by Species 8472. (VOY: "Scorpion"; Star Trek: The Magazine Volume 1, Issue 5)