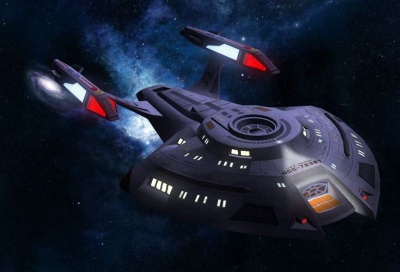 The USS Epiphany is a Nova Class starship, registry NCC-913081.

The exact cause of her disappearance remained a mystery for 17 years, until the vessel's automated distress beacon was detected by the USS Rosenante on Stardate 2408.04.27. The source of the beacon's signal was determined to be somewhere within the confines of the Beltanis Stellar Nursery.

It was discovered upon investigating that the Epiphany was not adrift in the Nursery, but rather had been captured by an alien probe called The Harvester. The vessel had obviously been cannibalized by other space faring races trapped within the Harvester, although there were several systems that were still salvageable by the USS Rosenante. Among them was the Epiphany's Navigational Deflector and Array.

Through a combination of sifting through the ship's logs and meeting with the only remaining survivor from the Epiphany Ensign Anna Morgan, the Rosenante was eventually able to decipher the strange events behind the ship's disappearance. 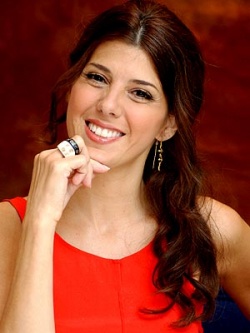 Among the original members of the Epiphany's crew was Medical Officer Ensign Donald Caskie, the long lost husband of Jennifer Caskie, First Officer of the USS Rosenante. It was discovered that Donald Caskie had been killed in a Hur'q Raid and had been claimed and reborn by the Kobali. He took on the identity of Hasiyl, the Chief Medical Officer of the Kobali Starship Cial. it was only after he had been reacquainted with his long lost wife, that his past memories resurfaced in the memory relapse called kyn'steya.

Anna Morgan had been adopted by the Nechani where she served as an Engineering Acolyte. She was selected to act as an Ambassador to the Rosenante crew on the behalf of the Nechani and their allies, the Sky Spirits and the Hunters.

The Epiphany was encountered in the Mission Fields of Elysium.