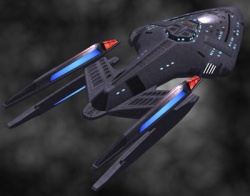 The USS Furious is a Prometheus Class starship that was dispatched in 2408 by Starfleet Command to stop the USS Rosenante. The vessel was commanded by Captain Saleke who served with distinction during the Federation Civil War.

The ship was dispatched by Starfleet command when it was reported that the USS Rosenante was conducting privateer attacks against federation outposts along the Cardassian Border. The vessel actually guilty of the attacks turned out to be the ISS Rosenante from the Mirror Universe.

That vessel was raiding the outposts to assemble the components needed to build an Omega Device.

The ISS Furious was a warship of the Imperial Union of Planets. The ship was commanded by that universe's version of Captain Saleke. In 2408, after the ISS Rosenante disappeared after delivering an Omega Device to the Sunali II system, the ISS Furious was assigned by Regent Doentiz to locate the Rosenante and either capture her or destroy her. The Regent feared that the weapon would be used against the Union by Captain Ahmed Ibn Salid to assume control of the IUP.

The USS Furious first appeared in the USS Rosenante mission: Into the Darkness, Go I.