Item Creator's Note: This USS Raven is an experimental craft recently employed in a side mission for Starbase Geneva. It is the fourth ship of its name. 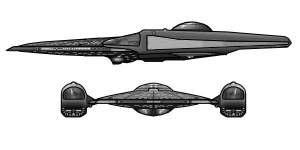 The USS Raven is a Harbinger Class starship. It is currently under command of Captain Amanda Ivanovica, and First Officer John Armstrong. The Raven was a small science vessel that was in deep space studying the Borg when the Federation Civil War broke out. It later docked at Starbase Geneva and learned of the situation. It is unknown if it sided with the 52nd Fleet or Admiral Doenitz. On docking with Geneva, Ensign Chandler and Senior Chief Petty Officer Callaghan were transferred to Geneva.