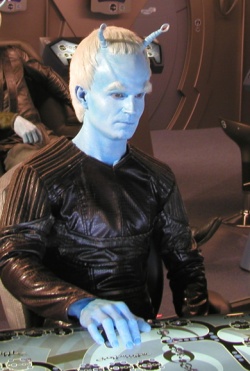 The Andorians are a humanoid species from the moon Andoria, capital world of the Andorian Empire, and were one of the founding members of the United Federation of Planets.

Most Andorians had a distinctive blue skin and white or silver-colored hair. Andorians had a higher metabolism than humans and also slightly stronger. Andorians were very susceptible to high temperatures, an Andorian could lose 10% of its body weight in as little as two days in climates approaching the boiling point of water. Because of the unusual physiology of the Andorians, intravenous injection was impossible; instead a doctor must opt for inter-muscular injection.

Andorians had on their heads two knobbed antennae which were used for balance. An Andorian was partially disabled and unable to fight immediately following the loss of an antenna, but was able to compensate this within a day or so. The antenna itself could take up to nine months to regrow on its own, although the regeneration could be completed in around half that time with electrical stimulation and cranial massage therapy. The loss of an antenna was a humiliating experience for an Andorian to come to terms with. Antenna movement apparently expressed feelings as well. An Andorian would sometimes point their antennae at a potential mate to signify attraction.

Andorians were a militaristic warrior race. This was underscored by the fact their weapons had no stun setting. Military ranks had a great influence on social reputations. However, Andorians never fought without reason, and deplored dishonesty, though they were capable of duplicity. Andorians considered their race to be deeply emotional and passionate, and although they were not known for their charity and have few sympathies they placed a high value on family.

All Andorians of adult age carry an Andorian Dagger.

In modern times, many Andorians choose to serve in Starfleet Marines.