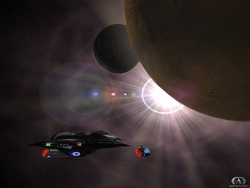 The USS Mystique (NCC-68125-C) was a Federation Starship of the Akira Class.

The vessel was assigned to the 52nd Fleet and was a participant in the Federation Civil War. The vessel conducted several combat operations during the conflict and was considered one of the most successful ships in the fleet.

that all came to an end however, when the Mystique was sabotaged by a disaffected member of her crew. The ship was in station at Starbase Geneva, when crewman Rooker, detonated several explosives on board, killing a third of her crew.

The Humans for Humanity hate group claimed responsibility for the attack. Rooker was captured and was executed for his crime.

The damage to the Mystique was so extensive that the vessel could not be repaired to a spaceworthy state. As a result, the ship was decommissioned in 2402.

Several members of the ship's crew, including Saleke and Baylon Trinin were reassigned to the USS Hades.

The USS Mystique's final Mission was Port of Call

The USS Mystique is currently in dock around the Mars Base for repairs.