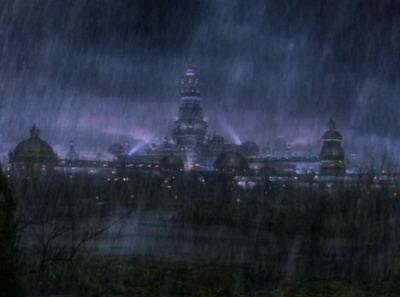 The planet's capital city is primarily a series of low domes broken by a tall spire, the Tower of Commerce, which marks the Sacred Marketplace, and is the seat of power of the Grand Nagus, the leader of the Ferengi Alliance.

The planet is best known for its nearly constant, planet-wide torrential rains, rotting vegetation, and rivers of muck.

After Grand Nagus Zek added an amendment to the Ferengi Bill of Opportunities allowing females to wear clothes and make profit, Ferenginar was plunged into financial chaos and a communications blackout was imposed. (DS9: "Profit and Lace")

The Tower also houses the offices of the Ferengi Commerce Authority. Liquidator Brunt had his offices in the Tower of Commerce until he was ejected from his job in 2373. (DS9: "Family Business", DS9: "The Magnificent Ferengi") Quark also briefly worked in the Tower as First Clerk to Grand Nagus Zek (DS9: "Ferengi Love Songs")

On Ferenginar, some criminals and financial deviants are taken by the FCA to the top of the spire of the Tower of Commerce and shoved off to plummet into the Sacred Marketplace, a full 40 stories below, where people bet on where the victims will land. (DS9: "Bar Association")

Criminals and other deviants are often thrown from the spire of the Tower and land in the Marketplace. Crowds may gather to watch the execution and gamble on where the victims will land. Smaller crimes may be punished with public humiliation that includes being hanged in the marketplace by the lobes. (DS9: "Family Business", "Bar Association")