"Oh believe me, the Nagus has the greatest business mind in the entire Ferengi Alliance, always thinking ten, sometimes twenty steps ahead of everyone else."
-Quark (DS9: "Prophet Motive") 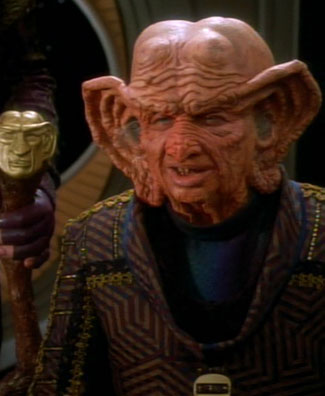 Grand Nagi may be installed by, and made to assume office upon the deaths of, their immediate predecessors, and can also be appointed to the position by the Ferengi Commerce Authority, which also reserves the right to remove unstable Nagi from office. A Grand Nagus with little sense for business risks assassination. When a Grand Nagus has been found incapable of discharging the duties of his office, the FCA may appoint an Acting Grand Nagus of the Ferengi Alliance until its Board of Liquidators determine whether or not the Nagus is fit to return to duty. If not, the Board may then appoint a new Grand Nagus. Brunt briefly held the office of Acting Grand Nagus in 2374.

Following the reforms of Grand Nagus Zek, the Grand Nagus serves as the head of the Economic Congress of Advisors, the Ferengi legislature. The Nagus may propose bills before the Congress and may veto or attempt to financiall influence the vote, but may not vote directly, and may empower the First Clerk of the Grand Nagus of the Ferengi Alliance to serve as his proxy when he is away. The first Grand Nagus, according to tradition, was Gint, the Ferengi who brought the ideals of capitalism and greed to the Ferengi and who wrote the Ferengi Rules of Acquisition; the current grand nagus is Rom. (Ferenginar: Satisfaction is Not Guaranteed.)

The Grand Nagus possesses the ability to appoint a Grand Proxy to act in his name in matters which he is unable or unwilling to deal with personally. (VOY: "False Profits")

The Nagus's offices are located in the Tower of Commerce on Ferenginar where he presides over the Alliance from the Chamber of Opportunity. Petitioners regularly seek to speak to the Nagus to solicit advice on business ventures and decisions. In doing so they are required to pay their respects, literally. After doing so their petition is summarized by the First Clerk before the Nagus reaches a decision.

The Nagus resides in the Nagal Residence, which is said to contain latinum-plated fixtures. The Nagus always carries a staff and it is traditional for the Ferengi to kiss it upon meeting him.