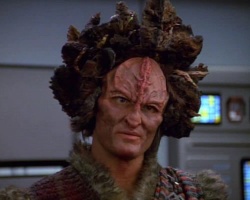 The Kazon were a violent warrior species from the Delta Quadrant, first encountered by the Federation starship USS Voyager in 2371. (VOY: "Caretaker") As of 2372, they were divided into eighteen different sects. Each sect has possession of different natural resources over which the sects fight each other. (VOY: "Caretaker", "Initiations") The Kazon are the only race that are beneath notice of the Borg. (VOY: "Mortal Coil", "Child's Play")

The Kazon were a subjugated race, used as slave labor by the Trabe, who had conquered their homeworld. It is unknown if the Kazon were divided into sects before they were conquered by the Trabe, but the sects were in existence during their oppression by the Trabe. One of the Trabe's tactics in keeping the Kazon under control was to encourage them to fight amongst themselves. (VOY: "Alliances")

In 2346, Jal Sankur convinced the Kazon sects to put aside their differences and rise up against the Trabe. In doing so the Kazon took the Trabe's ships and technology, forcing them to become a nomadic species, never allowing them to settle on a new world. (VOY: "Initiations", "Alliances")

In 2372, the leaders of all Kazon sects were invited to a peace conference on the planet Sobras by Captain Janeway along with the Trabe leader Mabus. However, Mabus only consented to attend the conference in the hope of eliminating all Kazon leaders at once. The assassination was unsuccessful, and Kazon relations worsened with both the Trabe and the crew of Voyager. (VOY: "Alliances") [edit] Political

As one, the Kazon were known as the Kazon Collective; however, they were really a collection of semi-independent sects and there seemed to be no overall leader or government. The major sects were Kazon-Halik, Kazon-Ogla, Kazon-Oglamar, Kazon-Relora, Kazon-Nistrim, Kazon-Mostral, Kazon-Hobii, and Kazon-Pommar. (VOY: "Caretaker", "Alliances", "Maneuvers", "Basics, Part I", "Basics, Part II")

The two most powerful sects were the Ogla and Relora, who possessed most of the Kazons' manpower and ships. The Nistrim were once a powerful and influential sect, however their power has diminished – by 2372, they possessed fewer than six raider vessels. (VOY: "Maneuvers")

The behavior of the various Kazon sects had caused them to make many enemies throughout the Delta Quadrant. Attacks on Talaxian trade convoys were frequent. (VOY: "Caretaker", "Alliances", "Investigations") [edit] Physiology

The Kazon were a humanoid race, having at least two racial variants, one minority race with brown skin and the most common race with copper-colored skin. The foreheads of all Kazon featured distinctive ridges and their black or brown hair grows in large chunks rather than individual strands. (VOY: "Caretaker", et al.)