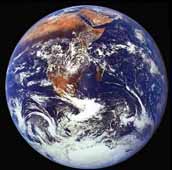 A view on Earth.

Earth is the third planet of the Sol System, the homeworld of humanity, and capital world of the United Federation of Planets.

The planet Earth was formed approximately 4.5 billion years ago, during the formation of the Sol system.

In 2367 a Borg cube entered orbit, but was stopped by the USS Enterprise D moments before it began to attack the planet. A second Borg attack, launched in 2373, was barely held off by Starfleet, once again in Earth's nearest vicinity.

In 2150 United Earth Government was established, uniting all nations of Earth, thereby eradicating any causes of possible war between the nations.

Despite the United Earth Government, there are still existing continental organizations like the European Alliance and the African Confederation. However, it is not clear what competences these institutions carry.

In 2161, Earth became a founding member of the United Federation of Planets and evolved to the de facto centre of the organization, as it is the location of Starfleet Command, the Federation Council, and the office of the Federation President.

Earth is classified as a Class M world, although Earth's classification borders on Pelagic (Class O), as two-thirds of the planet's surface is liquid water. There are several major landmasses and a wide variety of climatic and surface conditions, ranging from tundra to desert. The vast majority of the land surface is temperate or semi-temperate.