Starfleet Academy was established as a four-year institution, in 2161, with the motto Ex Astris, Scientia (from the stars, knowledge), to serve as a training facility for Starfleet personnel. The main campus of Starfleet Academy, based in The Presidio of San Francisco on Earth, are not too distant from the central hub of Starfleet itself, Starfleet Headquarters. 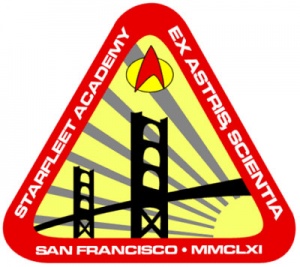 There are other campuses on Earth of Starfleet Academy, although they are much smaller.

Add things your character did while at Academy.

From his second to fourth year in the Academy, Edward Wolfe (Class of 2388) aided the tactical training division in programming and setting holodeck simulations for lower level pupils. Wolfe was also chosen for the President's honour guard in his third year to take part in ceremonies inducting new planets into the Federation.

In her first year at the Academy, Cadet Ari Lo'ren T'Vof cha'Tarven auditioned for and won a position as one of the official entertainers for Starfleet diplomatic events. By her graduation from the Advanced Tactical Training program, which she undertook by invitation after her original commencement in 2404, she was the only Cadet to have been awarded this yearly position 7 times.

During his sophomore year (2401-2402), Joran Matthew Brownlee set a galactic record for the 500 meter breastroke, winning the gold in the event at a meet against the Vulcan Science Academy, the Izar Tactical School, and the Bajor Institute of Astronomical Studies.

During his senior year (2403-2404), Joran Matthew Brownlee earned the distinction of being the only cadet to ever beat the Kobayashi Maru scenario without cheating. He did this by using his shrewd diplomacy skills on the decloaking Romulan Warbirds in order to keep them from firing on the ship while they towed the freighter back to Federation space.

During his junior, and senior year (2404-2405, 2405-2406) Will Alexander captained and led the Starfleet Academy Debate team to consecutive champions in the Earth Intercollegiate Debate Championships, beating the University of Texas in 2404-2045, and his Alma Matter the University of Oklahoma in 2405-2406. His team also placed second in the Federation Intercollegiate Debate Championships, losing to The Vulcan Academy of Arts and Science in 2404-2405, and winning by a slim margin in 2405-2406 against The Vulvan Academy of Arts and Science. Lewis Nymes, Elenor Night and James Hudson started their jazz band the Wandering Minstrels whilst in various years of the Academy.

During his Senior year, Starfleet requested Cadet Maraht's help with the search and rescue of some children that had been reported missing and suspected of becoming trapped in one of the old mine shafts in the hills around the old historic ghost mining town of Leadville in the Rocky Mountains on Earth on the North American continent.

Though the tourists had been warned repeatedly to not wonder into the mines, three children disobeyed their parents and dared each other to enter the mine at dusk and remain there until dawn. When part of the mine collapsed and trapped two of the three children, the third was able to escape to get help. Maraht was asked to help in the search and rescue efforts to find the children due to his natural expertise in sensing underground vibration and detecting underground structural weakness.

Maraht was able to get oxygen, limited light, and water to the children in time and then protected them from further harm in the dark by guiding them to safer passages before helping them out of the honeycomb of shafts and dangerous ledges and drop offs. Because of him, they did not panic and were able to survive their two day ordeal without injury.

The entire incident brought a reluctant Cadet Maraht into the attention of the media. Though publicly touted as a hero, he found himself the object of hate mail from the often violent group called Humans for Humanity. They later made an attempt to kidnap him from the campus, possibly to make an example of him, and were unsuccessful due to the fact that they had underestimated Cadet Maraht's voracity, speed and size. Most of the local cell group were captured.