Lanista is a Starfleet Officer, currently serving as the Chief Sciences Officer aboard the USS Rosenante 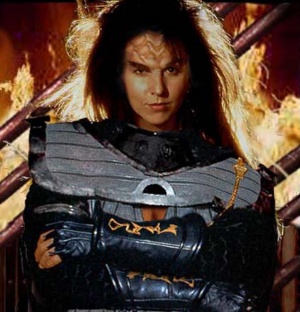 Klingon: tlha'nISta' is a contraction of tlha' nIS ta'mey, accomplishments hinder the chase -- meaning the hunt is more important than the prize. 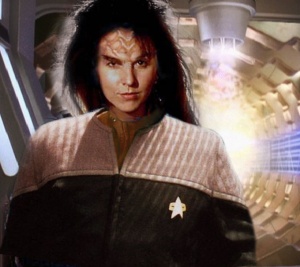 Federation Standard derivation: Since most non-Klingons have trouble with the tlh part, the character uses Lanista. Lanista is a word from an Ancient-Earth tongue called Latin. It signified someone who owned and trained slaves for gladiatorial combat.

Physical Description: Lanista is an extremely tall woman who engages in extensive physical workouts. She is quite fit. Her cranial ridges are somewhat less pronounced, and her teeth are more Vulcan than Klingon. At 7'4", 220 lbs. (100 kg), Lanista has a Body Mass Index of 20; a BMI of 18.5-24.9 is considered healthy for most adults.

Lanista exhibits the notably arched eyebrows, pointed ears, dark hair, and 'perfect dentition' of Vulcans along with the prominent ridged forehead of Klingons. Until she was larger than her Klingon shipmates, she was ridiculed for having the teeth of an herbivore and having a brow ridge pattern that resembled the Romulan avis imperatoris emblem. These criticisms stopped once Lanista was able to stop them. The Chalche'yon had to take on three new crewmembers following this resolution.

Lanista's father is a Klingon privateer. Her Vulcan mother was a descendant of members of the now-defunct Galactic Army of Light.

Lanista's father is QolloH, son of DI'al. He is a privateer Captain of the heavily-converted Bird of Prey on which Lanista was born. The House of DI’al is not one of the Klingon Great Houses. As such, Lanista’s family have served as privateers to other Houses. Some of the tasks were, however, demeaning in Lanista’s opinion. There is little honor is running errands. During Lanista’s life about the Bird of Prey, she assisted her father in suppressing one brief mutinous uprising. In a human crew, where honor was not so prized, mutiny was possible, Lanista’s father had told her. When Lanista joined Starfleet, QolloH told her to watch her back. Lanista possesses a KDF Captain's rank insignia, given to her by her father. QolloH was born in 2368 and is still alive.

QolloH is a 'conspiracy theorist' and tells tales as tall as his daughter of how the Federation sub-council known as 'ay' wejmaH wa' was responsible for destroying the moon of the Klingon Homeworld in 2293 with something called a peng qa'vam. He is convinced the entire Admiralty of Starfleet is corrupt – a belief at least in part borne out by the actions of Admiral Doenitz from 2406 onward. His beliefs allow for honorable behavior in Line Officers and Enlisted personnel of the UFP since he thinks mutiny is commonplace in Starfleet. He is ever-ready to site examples.

Lanista's mother's name was Ti'amah. She was a V'tosh ka'tur -- a Vulcan who rejects logic. She chose this road after failing the Kolinahr, an effort she had undertaken after the failure of the Army of Light. Ti’amah ultimately perished during one of the demeaning privateer services performed for the KDF. The mission was something QolloH would later describe as 'yet another pointless chore.'

Ti'amah was conceived at (or very near) the center of the galaxy, beyond the so-called "Great Barrier", in 2287. There were several V'tosh ka'tur Vulcans in the Army of Light, paramilitant pilgrims seeking enlightenment. Ti'amah's mother went by the pseudonym Rumarie. Ti'amah never knew her father.

QolloH and Ti'amah met on Risa (Epsilon Ceti) in 2382. Ti'amah is 95 years old at this time – still quite young for a Vulcan female. Ti’amah was to bear QolloH only one child, in 2383. Lanista was born aboard her parents' ship, the Chalche’yon (Satisfied to rule the sky), in orbit around Planet ‘erlIghan. Ti'amah died in 2399, at the age of 112. Lanista was 16. The ship's surgeon failed to save Ti'amah's life – resulting in Lanista carrying a grudge against the medical profession since.

It was Ti'amah's death that caused Lanista to leave the life of a privateer. Still, the Chalche'yon was Lanista's home and she remembers it fondly. She even continues to correspond with surviving friends and family from her pre-Academy days. A trio of Orions (Hatsya, Meissa, and Saiph) are business associates from that time, as are a few Ferengi. 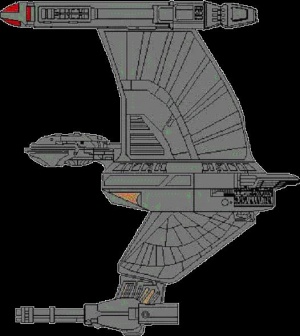 Like her mother, Lanista tried and failed to achieve Kolinahr. Lanista possesses her mother's Kolinahr aspirant necklace. Though she failed the Kolinahr, she did attend and graduate from the Vulcan Science Academy. She enjoys science, but only in that Engineering is "Applied Science."

Her hybrid physiology may result in unforeseen conditions such as her great size and proportionate strength. It seems the genes that regulate growth are contributed by the female in Klingons and by the male in Vulcans. Since Lanista's parentage is the opposite of this, her growth must be regulated artificially – whether by careful dietary regimen or by medical intervention. The condition is referred to as heterosis or hybrid vigor.

QolloH believed Lanista's growth would never stop, thinking her jak'tahla to be something that would be continuously ongoing. Certainly QolloH loved bloodwine, or legends, or both somewhat too much. In actuality, the growth of a hybrid to a size larger than normal for either parent is not unusual. Heterosis or “Hybrid Vigor” can manifest in increases in: size, growth rate, fecundity, efficiency of metabolism, overall health, immunity to genetic diseases to which either parent might be susceptible, muscle mass and strength, etc. In short, 1st-Generation offspring of hybridization will usually show, sometimes in exaggeration or “over-expression”, the desirable qualities of the parents.

While heterosis does not always mean fitness in the sense of survival of the fittest, there can be no question Lanista is very fit physically. Lanista’s strength may be as exaggerated as her size, particularly since she engages in Physical Fitness training in High-G. She may even hang out in the hangar bench-pressing Type-15 Shuttlepods (one weighs 1892 lbs.). The disadvantage inherent in this size comes when it's time to actually try to fit in a Type-15 Shuttlepod.

Lanista's Klingon heritage makes her immune from the inconvenience of pon farr, but also makes her susceptible to seemingly permanent plak tow or blood fever. Lanista's emotions are always intense, and she is subject to primal urges. While this is what made her fail the Kolinahr, it has served her well in her pre-Academy days.

Both Klingons and Vulcans prefer warmer temperatures, and Lanista is no exception. She keeps the temperature of her personal quarters (when she has any) high, and sets the gravity of any space she occupies alone to 1.254g – approximating that of the Klingon Homeworld.

Lanista exhibits the brak'lul, or redundancy of internal organs, common to Klingons. She also has the highly efficient respiratory and digestive systems of Vulcans. Her senses are very acute – especially her olfactory and auditory capabilities. She has the vulcanoid inner eyelids. Lanista can (but does not like to) go for long periods without food, water, or sleep.

Lanista's physical strength is augmented, owing to her heritage. However, her psychic potential is lacking. She is almost a psychic null, actually sometimes suppressing psionic-like activity near her. She is very adept at jury-rigged engineering devices and tools, due to her life aboard a privateer vessel.

tlha'nISta' enjoys Physical Fitness training in High-G. She is working on developing a synthesis of Klingon and Vulcan fighting styles – combining Vulcan Suus Mahna with Klingon Mok'bara. Mok'bara incorporates the use of Klingon bladed weapons, including the lahj (which Lanista does not possess). Mok'bara techniques are performed with clawed hands and fast, rough movements.

She despises holograms and will not make recreational use of holodecks.

Her Klingon heritage makes tlha'nISta' a warrior. Her Vulcan background gives her an understanding of logic. Her life has made her understand that Vulcan logic can be a tool of war.

Being a daughter of two dissimilar cultures, Lanista has tried repeatedly to make a single emblem from elements of the Klingon trefoil and the Vulcan IDIC. Not one design has proven aesthetically pleasing thus far.

Lanista's possessions are mostly weapons and trophies of war. Her armaments include an ahn'woon, an 'alngegh, an 'aqleH, a betleH, a Breen CRM 114 directed energy weapon, a chuHwI', a Daqtagh, a ghintaq, a ghonDoq, a jey'naS, a Starfleet standard-issue Kabar, a lirpa, a ma'veq, a meqleH, a QIS, a qutluch, a tajtIq, a Federation TR-116 Kinetic Energy Projectile Rifle, and a yan. Though most of these are too large to be carried covertly, Lanista will typically wear the ahn'woon as a belt or sash, and have at least one of the smaller knives (chuHwI', Daqtagh, ghonDoq, ma'veq, QIS, and/or qutluch) on her person.

NOTE: Lani's betleH is a non-standard, larger-than-normal sized weapon. The standard bat'leth, sized for an average Klingon male is 116cm (and weight about 5.3 kg). Lanista's is one she built herself and it is proportionately larger – at 130.872cm and 5.979kg. In other words, 1.1282% larger and heavier than the norm.

Lanista wears a Klingon vambrace on her left arm, with a 2278-2350-era Starfleet insignia attached to the vambrace.

She has a pet qaryoq'a' – essentially a Klingon parrot - named jengSI'.

Lanista also owns a Risan horga'hn, which she usually displays openly in her office, rather than privately in her quarters.

2408.01.08: Lanista's first assignment was the USS Dennison. Lanista was given the rank of Ensign (JG) and the position of ACEO. 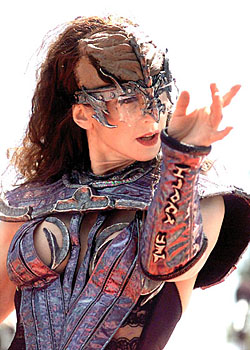 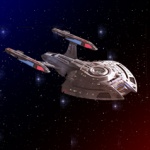 Special Mission for the Empire[edit]

A five-year Matter of Honor in the Empire[edit]

Posting to the USS Rosenante[edit]

Lanista is played by Frank Truelove.