"The crew of this station, senior staff, and regular crew, have held up extremely well in all sorts of situations, and most of them are people of upstanding character. It has been my pleasure, and privilege to serve with such a fine crew. While most of the senior staff is leaving along with me to the USS Boudicca, it will not be the same has the sights and sounds of this station. I'm glad to call Geneva my first station of duty."
— Lt. (JG) Brian Rogers, in his final log entry from Geneva, Stardate 2407.01.07 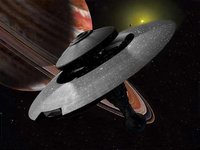 Starbase Geneva is a Truidin Class starbase that acted as the 52nd Fleet's base of operations during the Federation Civil War.

Following the declaration of war which was the official start of the civil war (hostilites had been ongoing for years), the senior staff of Starbase Geneva (see list below) were transferred to the USS Boudicca. Midway through the recent mission, the crew of Geneva was supplemented by the arrival of the USS Raven - C which brought Samantha Chandler on board. Starbase Geneva also houses a branch of the group Humans for Humanity, a terrorist organization trying to remove the influence of alien species from that of human beings.

Those who were transferred to the Boudicca

Those who are still stationed on Starbase Geneva