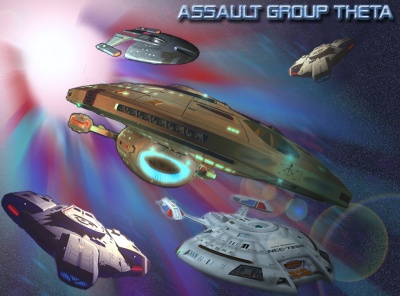 Located Deck 4, replacing the majority of the Science Labs aboard. The Mk2 Cloaking device has been installed specifically for its operations, which are classified. The cloak can remain indefinitely, however, causes significant power usage, drawing from shields, weapons and none essential systems whilst in use.

Another modification of this Nova Class Starship, These mines are used for sabotage, and can be deployed from the Veneverance whilst both ship and mine is cloaked. The mines are designed to attach to the hull of ships and stations, and can either be detonated via a timer or remote. These mines and deployment mechanism replace Cargo bay 2 and the Waverider shuttle, usually docked on the lower hull of a typical Nova Class Vessel.

As with all Nova models, the USS Veneverance is capable of sustained atmospheric flight and also Landing via support struts, located on deck 8.

The USS Veneverance entered service in 2387, originally fitted for scientific exploration and research, and spent several months assigned as part of the preliminary exploratory task force of the 52nd fleet, studying the Beta Quadrant and most importantly, the Sub-Space river linking the Alpha and Beta Quadrants.

Upon the outbreak of the war however, the Veneverance was reassessed, and the decision was made to refit the vessel for a more tactical role. Due to the size of the ship and its secondary deflector dish, it was decided to retrofit the Veneverance with a cloaking emitter, and also an experimental stealth mine and deployment system. The combination of the cloak, the ships size and maneuverability, and its ability to now deploy mines whilst undetectable brought the inevitable assignment of reconnaissance and Sabotage.

On its maiden voyage after refit, the USS Veneverance successfully managed to cripple a vital relay station just beyond the sub space river inside the Alpha Quadrant. Despite three Doenitz Vessels, including the USS Wyvern, patrolling the area surrounding the station, with its cloaking capability the USS Veneverance was able to successfully plant two mines across the hull of the station, and one to the hull of the USS Hilton, a Defiant Class Ship. Without detection the Veneverance managed to infiltrate, depart and remotely detonate the explosives it had planted, destroying the station and crippling the Hilton, and more importantly, preventing sensor data being relayed to stations under the control of Doenitz of the movement of 52nd ships in the Alpha Quadrant.

The success of this mission paved the way for many more, and also proved the tactical prowess of the Veneverance, as detection has forced it to defend itself several times, with positive outcomes on every occasion. However, its primary advantage is its cloak, and in a head to head fight, would be unable to defend itself against vastly superior foe in terms of size and weaponry. 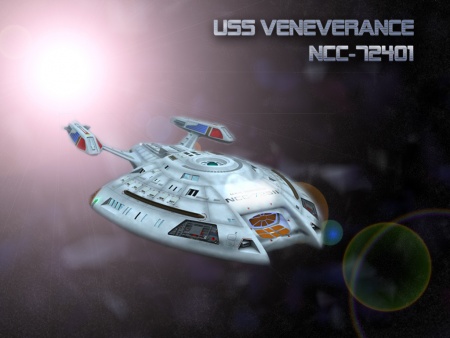