The Dopterians are an unscrupulous humanoid species found throughout the Alpha Quadrant.

They are distant relatives of the Ferengi, who share a similar four-lobed brain structure and with it an inablility to be read by telepathic species such as Betazoids. (TNG: "Firstborn", DS9: "The Forsaken")

Dopterians also share an unusual resemblance to the Kobheerian species; their appearance is almost identical, however Dopterians have Ferengi-like noses, whereas Kobheerians have two large, elongated flat nostrils in the place of a nose.

Gorta was a Dopterian who, in 2370, unwisely entered into a mining operation with Lursa and B'Etor on Kalla III, a planet in Pakled space. They managed to mine 10,000 kilograms of magnesite ore.

Lursa and B'Etor then betrayed Gorta, took the ore and left him stranded on Kalla with nothing. He was later picked up by the USS Enterprise-D. (TNG: "Firstborn") 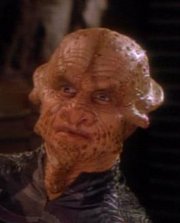 In the USS Hades Mission Shoreleave , A Dopterian Assassin infiltrated the USS Hades from Starbase Geneva in an attempt to fulfill a contract.

After defeating the Myenru Fleet, The USS Hades put in at Geneva Station for some repairs resulting from the Battle at Beta Seranis III.

Shortly after her arrival, An explosion ripped through the ship's Environmental Subsystems. The explosion injured several crew members. A subsequent investigation uncovered signs of sabotage to critical power relays leading to the damaged sections.

Data soon led the Chief Security Officer Baylon Trinin to suspect a member of the Geneva repair team named Crel. He believed that Crel sabotaged the systems in order to assassinate a Dopterian member of the Hades Crew.

After some further investigation and a second attempt to assassinate Greb H'rokal in Main Sickbay of the Hades, using a Disruptor Grenade of Orion Syndicate Origin, Baylon became convinced that Crel was indeed the only suspect.

His investigation led him to uncover a connection between the Hate group Humans for Humanity, The Orion Syndicate and the Dopterians involved in the sabotage. It was discovered that The Hades crewman, recently transferred aboard was actually attempting to use the Hades to escape from his prior employer, the leader of the local HUmans for Humanity Group. Crel was sent to assassinate him, when it because feared that he may divulge information concerning the alliance and business arrangements with the Orion Syndicate. This alliance was fundamentally cenetered around the acquisition and use of illegal weaponry by the hate group aboard Starbase Geneva.

Baylon and the Hades crew managed to capture the assassin, when they busted the weapon's smuggling operation at the Midnight Lounge, a irreputible dive on the station. Crel was sentenced to penal confinement for his role in the sabotage of the Hades in mid-2407.