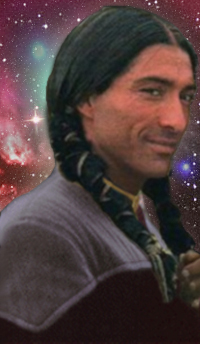 On Stardate 2407.03.07 Bruce was involved in an unsanctioned expedition to rescue Lt(jg) Dru Tagon from imprisonment and eventual execution at the Prison facility of Djörn Major.

Despite the odds, the extraction team led by Captain Devan Sash and Lt. Commander Jonas Lemar, succeeded in infiltrating the maximum security section of the station and fought the Starfleet marine contingent under the command of Major Julian Wells to an uneasy stalemate.

At that point Captain Sash ordered Cecilia Bruce to enter into negotiations with Major Wells and she was able to appeal to the Major’s sense of honor resulting in a ceasefire agreed to both by him and Captain Sash.

During the ceasefire the team was able to free Tagon from his cell and the only moment of tension occurred when Wells and his Marine moved to prevent the extraction team from moving Tagon out of the vicinity of the maximum security cell block. Wells ordered the move however to save the life of Tagon who was wearing and explosive collar which would detonate upon him being removed from the immediate vicinity.

As such Wells had not violated the provisions of the ceasefire as he had stated from the outset that as long as the prisoners life (Tagon) was not endangered he and his men would not interfere.

Captain Sash used the time to discover a way to defeat the explosive collar and with that done ordered a STS transport right out from underneath Major Wells’ nose.

It was at this precise moment that Ensign(jg) Thom Hania threw an explosive charge at Wells and his marines at the moment of beam out.

NRPG I just wanted to end this part of the adventure with a Big Bad Bang. I sent this out before but somehow, it got lost in transit, so I’m sending it out again.

Thom had watched the events transpiring around him with growing consternation and mounting fury.

Though Major Wells had stood his NCOS down for the moment, and Bruce had pronounced him an ‘honorable man,’ Thom did not see him that way at all. ~Wells was up to something big time, Great Spirit, something we’re not going to like at all.~

Once he had done that, the stalwart marine major had done absolutely nothing to assist CEO Salid’s frantic efforts to bring the security field imprisoning Dru Tagon down. While Wells’ lack of assistance seemed to speak of neutrality, his body posture, mask-like features, focused and dilated pupils and his neuro-linguistic programmed eye movements spoke volumes to Thom.

Wells’ whole attitude seemed one of passive aggressive condescension. ~He’s stalling, waiting for more troops probably, while we’re all friendly and trusting, with our collective attention focused on freeing Dru Tagon. Except for the Klingons, we are all in close firing range of him and his troops. Big mistake - for us, but fatal for him. If this gets dicey, I’m going to kill him quick, taking as many Marines as I can with him.~

So focused were the Marines on Sash and the others, no one seemed to notice the small but exceedingly powerful plastique ordinance still hidden in his closed right hand. With flawless and unnoticed ease, Thom quickly calculated the placement of the grenade behind Wells’ back, far enough to kill him. It would screw up his NCOs without endangering either the Away Team or killing the Klingon B’Harniah in the process. Cybernetically, Thom opened a passive audio channel between the concealed female Klingon’s com-badge and his EVA suit. Hearing her move into action would signal the incoming presence of additional prison staff and sign Wells’ instant death warrant.

Thom was relieved to hear only pained silence on B’Harniah’s part, indicating that all was quiet there. However he was not relieved to hear her stifled, but labored, breathing. ~Brave fool, you should’ve accepted my offer of Meds, baby. Your warrior’s pride is going send you to Sto’vo’kor, but then that’s where you want to go isn’t it B’Harniah? I hadn’t lied when I told you I saw Sto’vo’kor in your eyes, brave, foolish B’Harniah.~

When Dru Tagon’s security field came down, and Salid and Sash talked to the imprisoned Brickar, strange, and even inexplicable, things happened in rapid order. Wells ordered the Away Team to stand down and depart, without the imprisoned Brickar. Thom had almost thrown down on Wells’ troops then, but hadn’t because he actually allowed Sash and Salid to enter Tagon’s cell and take tricorder readings on the Brickar’s explosive collar. ~More delaying tactics, no doubt. Wells will do anything to keep us here long enough for reinforcements to catch us flat footed.~

Over his com-system, Thom heard Wells refuse to give Sash and Salid the means of disabling Tagon’s explosive collar. ~All the better to keep us here Wells, until it is much too late. Nothing incoming from the wounded and rapidly weakening B’Harniah. Good.~

At that same time Hania also heard, over the coded, scrambled com link system, that Sash wanted STS transport in the next few seconds. ~Obviously between the two of them, they had somehow found a way of moving the Brickar without detonating the explosive collar around his neck. ~Things are going to be heating up fast now, Great Spirit. Protect us all now, please Great One. The Shot is about be released, Great Spirit.~

Over his com-link, Thom heard two separate, but dramatic things happen almost simultaneously; Sash telling Wells that he would be leaving, but taking the Brickar with him and B’Harniah roaring about incoming Marines. ~Wells had been playing us for patsies. ~

Thom felt the first tingling of Salid’s STS beaming out.

~ Release the Shot, Hania.~ The words seem to come from the Great Spirit Itself.

Even as he beamed out Thom hurled his concealed plastique grenade to the ceiling, which was about 12.7 feet above Major Wells’ lying, conniving head. Thom heard the plastique mass impact and stick there. He watch with great mirth as Wells’ surprised Marine’s faces gaped at the sudden realization that their antagonists were now suddenly beaming away - all the while never realizing that a second and more cataclysmic surprise was about to befall them.

As he beamed away, Thom thought he heard mass phaser fire from B’Harniah’s last location, combined with the downward detonation of the plastique grenade he had just thrown above Wells’ conceited head eleven seconds earlier.

He, the Nimitz Team, Lemar and all his Klingons were beamed away a microsecond before his thrown grenade’s concussive power filled the immediate area with instant, immediate and final death.

(Reply None) (Posted by Jim)

After successfully escaping from Djörn Major, Bruce informed Captain Sash who had not witnessed the incident, of Hania’s actions so that he could take formal action against Hania. During the subsequent interview, Hania freely admitted taking the action and did not seem to believe that he had done anything wrong at all.

It was at that point that Hania accused Bruce of betraying him and then without further warning, collapsed and died, toxicology tests indicate poisoning as the cause of death.

Later investigation of the death of Thom Hania has been ruled by Starfleet Investigators to be a suicide.

Subsequent intelligence intercepts indicate that Major Julian Wells was killed as a result of this act. As a result this incident is classified as a premeditated murder, as well as a direct violation of Starfleet Special Order Number Two.