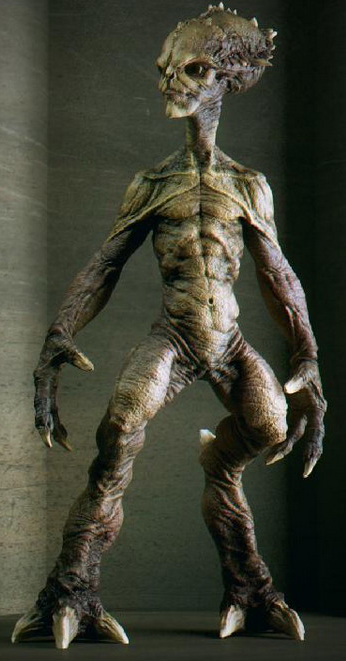 Opthidians hail from an unknown planet somewhere near or at the edge of the Alpha-Beta Quadrant border. Very little information is known about this species, but it is clear that there has been some terrible conflict between this species and the Borg.

The first, and to date, only encounter between the Opthidians and the United Federation of Planets took place in early 2407. The USS Rosenante while responding to the distress signal of the Federation Freighter Sky of Tomorrow. The freighter had missed a scheduled stop and after some time, a distress signal was intercepted.

The encounter with the Opthidians first took place when a group of Opthidian scout ships, led by the vessel Shungar attacked and destroyed the personal vessel of Lieutenant Chance Raschen in orbit of the Federation Mining colony at Davros III. Raschen was rescued by the Rosenante and the Opthidians withdrew.

Later when it was discovered that both the Sky of Tomorrow and the mining colony were both abandoned, the Rosenante sent a landing party down to the planet's surface to investigate.

It was there that they encountered the Opthidian. The Opthidian with miners from the colony whose remains had been reanimated by a mutated form of Borg nanoprobes. The Opthidian was injured in the conflict.

The Opthidian Tracker that was encountered on Davros III carried in his body an extremely deadly biological virus that was capable of destroying the entire biosphere of the planet Davros III. The virus was capable of remaining virulent for a period of approximately 200 standard years. This biological weapon was designed to destroy the corpses that the Modified Matron Nanoviral Pool required to survive. It deprived them of their ability to collect bio electrical impulses and robbed of any chance to escape the planet the colony was effectively exterminated.

It is unclear whether all Opthidians carry this biological agent or if it is unique to the trackers that were encountered.

The Opthidians obviously excel in medical science, as the Matron Nanoviral Pool was a direct result of their attempting to reprogram and use Borg nanoprobes to further extend their already long lifespan. Additionally, they possessed advanced biological warfare technology as well as advanced force field and energy manipulation technologies.

Nachook was armed with a staff-like weapon that was comprised of field- contained energy and he wore a personal sterilization field belt as well.

Very little is known of Opthidian history. What is known is that there was an encounter with the Borg which resulted in the Borg discovering that they could not assimilate the Opthidian physiology. As a result of this war, however, the Opthidians discovered nanotechnology, and applied it to modifying Borg nanoprobes to conduct automated medical repair work inside the bodies of the hosts.

Apparently these nanoprobes developed a hive mind like consciousness. War broke out and in the end the nanoprobes began to kill their hosts and reanimate the corpses. The ensuing conflict cause the complete destruction of the Opthidian home world's biosphere. Since that day, the Opthidians have relentlessly hunted down all outbreaks of the nanoprobe colonies.

For this purpose they established the Bureau of Biological Cleansing.

This species was first seen in the Rosenante Mission: A Fine and Private Place