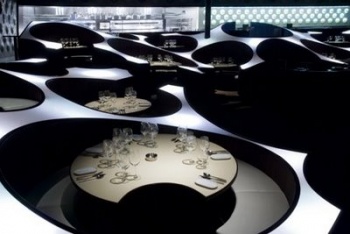 RJs is a sleek ultra modern restaurant located on Starbase 989 near the borders of the Romulan Star Empire in Federation Space.

The Restaurant is run by a pair of Humans, who are involved in a number of petty crime rings. These crimes include, prostitution, minor smuggling, data piracy and picking pockets.

The pair were in league with the head of Starbase security Lieutenant Adraa Mosul. During the investigation of the murder of Captain Joseph Taylor, the restaurant owners aided the Vulcan Sanok in gathering intelligence on the station's underground elements.

In return for their assistance to members of the USS Rosenante they were given the opportunity to reform and stay away from further criminal pursuits.

On stardate 2414.01.01, the restaurant was seriously damaged by a rioting mob when a sudden power cascade shut down all power to Starbase 989. The crowd panicked and among those trying to simply return to their quarters were looters and discontents. Starfleet officers from the Federation starships USS Boudicca and USS Rosenante attempted to protect the properties, but were unsuccessful due to manpower shortages caused by the event.