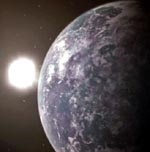 Romulus is the primary homeworld and capital planet of the Romulan Star Empire. It is the joint-third planet in the star system, and it's tidally locked sister planet is known as Remus.

Romulus is often described as a beautiful planet, filled with lush vegetation, large oceans and lakes, and breathtaking landscapes. It's designation is M-Class and it is known to have two moons.

<<Under Construction - More to Come>>