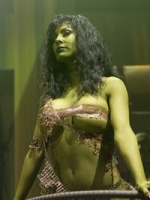 Mashari is a member of the Orion Syndicate operating on Starbase Geneva. She, along with her twin- sister Terella were responsible for illegal arms and handling assassination contracts put out by the syndicate.

They used the Midnight Lounge as a front for their operations.

The Lounge is owned by an Andorian bartender and is a favorite hang out for fringe criminals, smugglers and bandits.

Among the types of people that have conducted business there are members of the Orion Syndicate, Nausicaans, Klingon pirates, and Andorian Smugglers. it has also been home to several ill-reputed Ferengi as well.

In 2403, Baylon Trinin posed as an assassin for hire in order to track down a Dopterian Assassin named Crel. Unfortunately his cover was blown when he was introduced to Terella an Orion woman that he was already acquainted with.

The two had met previously, during a viral attack and riot started by the Humans for Humanity hate group. That group was being supplied weapons by the pair and were planning to overtake the Starbase after the delivery of a large cache of Orion weapons were delivered to them.

Mashari was captured by Starfleet Intelligence with the aid of the crew of the USS Hades trying to sell weapons to Humans for Humanity. She is currently serving a sentence in a penal colony.